Quicksilver; Is Your Diagnostic “Mettle' Spot On with This CXR Diagnosis?

A 43‐year‐old man with a history of remote IV drug use, alcoholism, and heavy tobacco use presented to the ER after a car accident complaining of dyspnea and a cough productive of mucopurulent sputum. On exam he exhibited bronchial breath sounds in the bilateral lower lung fields and left‐sided egophony. He was afebrile and saturating 94% on 3 L of oxygen by nasal cannula. His notable labs included a leukocytosis (18 K/mm3), a normal basic and hepatic metabolic panel, and a normal arterial blood gas. A chest x‐ray demonstrated patchy bilateral airspace opacification and innumerable punctate radiopaque foci Throughout the chest as, demonstrated below: On further discussion he reported having been forcibly injected with mercury in a murder attempt while an active IV drug user, 13 years previously. Shortly after this incident, he relocated and was treated by a toxicologist with succimer [meso‐2,3‐dimercaptosuccinic acid (DMSA)].

Metallic mercury was historically used in the medical treatment of tuberculosis, syphilis, and psoriasis and as a potent diuretic in the treatment of heart failure. Today it is used only as a component in a variety of organomercuric compounds such as skin ointments and vaccines. It exists in 3 forms: inorganic, organic, and elemental. In terms of human exposure, amalgam fillings are the most common present‐day inorganic form, whereas fist (shark, swordfish, and tuna) represent the most important organic source of mercury and have rarely been associated with outbreaks of methylmercury poisoning (Minamata disease). The CNS and the kidneys are The principle organ‐system casuaities of mercury toxicity. Conversely, poisoning with elemental mercury is relatively rare. Such poisoning often occurs in the setting of intravenous administration, as for instance during an attempted suicide or homicide, as was the case with our patient. The clinical manifestations and toxicity of elemental mercury exposure tend to be less profound than intoxication with other forms. Several reports in the literature describe large intravenous exposures with virtually no untoward effects other than the radiographic manifestations. Radiographically. intravenous mercury toxicity Typically manifests with innumerable punctuate metallic densities throughout the lung fields because the metal embolizes to the pulmonary vasculature after passing through the right heart. Similar radiographic densities can also be seen in and around the viscera, as some of the metallic substance further passes through to and deposits in the systemic circulation as well, either by precapillary shunts or directly through the pulmonary vascular bed. 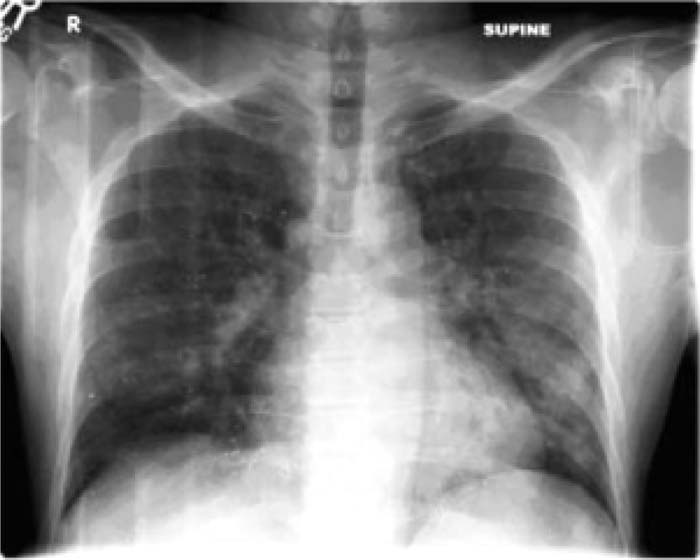 Elemental mercury toxicity is a rare clinical event but is readily diagnosed by The telltale innumerous punctuate metallic densities evident on chest x‐ray in the appropriate clinical context.

Quicksilver; Is Your Diagnostic “Mettle' Spot On with This CXR Diagnosis?.