RATS AND RACCOONS IN THE CITY: URINE TROUBLE WITH LEPTOSPIROSIS

Case Presentation: A 62-year-old male from a major urban city in Northeast US with history of hypertension and type II diabetes mellitus presented with fevers and thigh pain for three days. He had no recent travel history, sick contacts, or bug bites. Physical examination was notable for injected conjunctiva. Lab work revealed leukocytosis, thrombocytopenia, acute renal failure, and rhabdomyolysis. The patient was presumed to have viral myositis on admission and treated with supportive care. The patient continued to spike fevers with worsening thrombocytopenia and renal function as well as new drastically rising direct bilirubin levels. An abdominal ultrasound was notable for hepatomegaly without ductal pathology and enlarged kidneys. Infectious workup including blood cultures, Lyme, Babesia, Malaria, HIV, HTLV, EBV, and Hepatitis serologies were negative. Upon further history patient was found to have multiple animal exposures including a pet dog, raccoons in his back yard, and rats at his workplace. A concern for leptospirosis arose and the patient was empirically started on doxycycline. Once antibiotics were initiated the fevers abated and labs (creatinine, creatinine kinase, and platelets) quickly started to normalize. Bilirubin, although delayed, also trended down. Leptospirosis antibodies were negative in the hospital however on return to infectious disease clinic three weeks after discharge antibodies were positive.

Discussion: Leptospirosis, a disease caused by a bacterial spirochete named Leptospira, is a zoonotic disease spread through a variety of both wild and domestic mammals (ie. rodents, cattle, swine, dogs, horses, and sheep). Clinical manifestations include fevers, chills, myalgia, and conjunctival suffusion. Clinical course can vary substantially and in severe cases referred to as Weil’s disease, comprising of fever with jaundice, non-oliguric renal failure and acute respiratory distress syndrome. Leptospirosis is common in tropical regions with most cases occurring in patients who have contact with fresh water or environments that expose them to infected animal urine (1, 2). According to a study on leptospirosis associated hospitalizations in the US from 1998-2009, most occurred in the Southern and Western and the least occurred in the Northeast (1). The vector for the infection in our patient is uncertain but could be either his dog through exposure to raccoon urine in his backyard or by the rats at his workplace (4). A study in 2017 on the prevalence of canine leptospirosis in the US showed a 0.02 probability of canine having positive Ig in major cities such as New York City (3). Although unlikely our patient was found to have leptospirosis. The graphs depict how initiation of doxycycline results in rapid normalization of labs further supporting the diagnosis in the absence of serologic confirmation of the illness.

Conclusions: Leptospirosis is a disease whose risk depends on epidemiologic exposure thus in locations without high endemic rates or overt patient risk factors the diagnosis can be easily overlooked. In patient with high fevers, mylagias, renal failure and elevated bilirubin the diagnosis should be considered regardless of location. Empiric doxycycline should be initiated if clinical suspicion arises as available leptospirosis antibody tests are often negative in the acute phase of the illness.

IMAGE 1: Rapid improvement of labs after initiation of Doxycycline 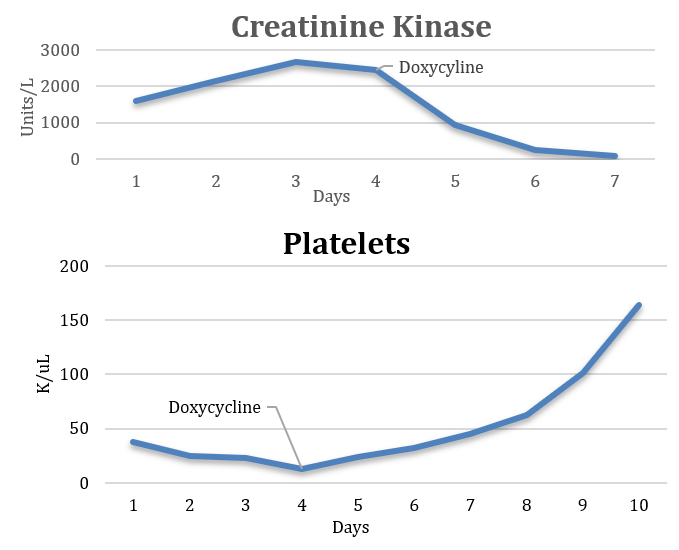 IMAGE 2: Rapid improvement of labs after initiation of Doxycycline 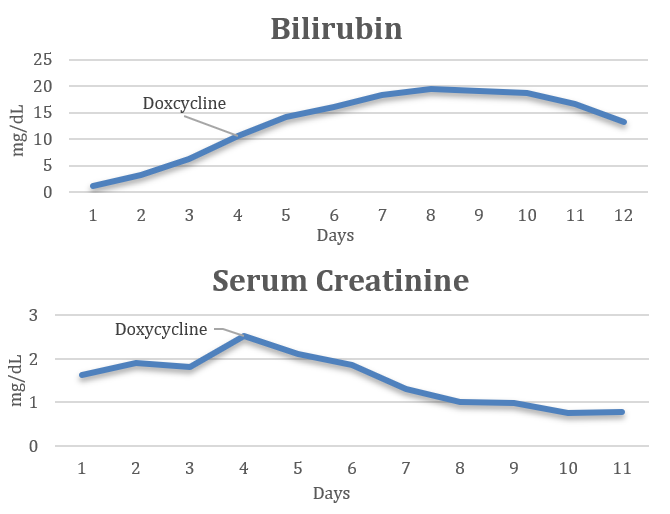 RATS AND RACCOONS IN THE CITY: URINE TROUBLE WITH LEPTOSPIROSIS.