RENAL CELL CARCINOMA – A RARE CAUSE OF GASTROINTESTINAL BLEED

Case Presentation: A 73-year-old male with chronic kidney disease stage 4 from polycystic kidney disease, diabetes, and hypertension presented 2 days after having a peritoneal dialysis catheter placed complaining of dysphagia, dyspnea, abdominal pain, and worsening lower extremity edema. He was not known to have any prior heart or lung disease. His baseline creatinine was 3.8 mg/dL. Physical exam revealed an erythematous catheter site and lower extremity edema but was otherwise unremarkable. Laboratory analysis was significant for serum creatinine of 15.7 mg/dL, blood urea nitrogen of 174 mg/dL, sodium 116 mmol/L, and potassium of 7.0 mmol/L. Pt was noted to have bright red blood per rectum with a hemoglobin of 6.2 g/dL requiring blood transfusion. An HD catheter was placed to start emergent hemodialysis.CT abdomen showed a right kidney anterior lower pole 7.3 cm heterogeneous mass suggestive of renal cell carcinoma with invasion into the wall of the distal second duodenum (figure 1). Urgent EGD revealed grade 5 esophagitis, a large amount of old blood in the stomach, and a duodenum that was completely occluded with clots preventing the endoscope from passing. Due to his ongoing bleeding, he underwent right renal artery embolization. Thereafter, he underwent exploratory laparotomy with duodenal mobilization, gastropyloroduodenotomy, suture ligation of the bleeding duodenal ulcer, and pyloroplasty. The right kidney tumor was biopsied and ultimately revealed clear cell renal cell carcinoma. He continued to have problems with GI bleeding requiring repeated blood transfusions and subsequently had embolization of the gastroduodenal artery. Despite these interventions, he continued to require blood transfusions. His mental status remained poor. Discussions were held with the family about his multiple medical problems and his poor prognosis. Family transitioned him to comfort care and he passed 18 days after presentation.

Discussion: Renal cell carcinoma (RCC) is responsible for nearly 13,000 deaths per year in the United States. RCC accounts for up to 90% of all kidney malignancies. Over half of RCCs are discovered incidentally when investigating non-specific abdominal symptoms. Approximately 30% of patients with RCC have metastatic disease at time of diagnosis. The most common sites of metastasis, in descending order, are lung, bones, liver, and brain with metastasis to the small intestine exceedingly rare (0.71% of cases). RCCs tend to be hypervascular as do their metastatic lesions. With metastasis to the gastrointestinal tract, gastrointestinal bleeding (GIB) can occur due to the abundant vascularity seen with RCCs and lead to serious bowel complications.

Conclusions: RCC accounts for 3% of all adult malignancies and can present with a wide variety of symptoms depending on local invasion, paraneoplastic syndromes, and metastasis. RCC can cause gastrointestinal bleeding via direct invasion or metastasis. It should be noted that direct invasion is only possible into the second part of the duodenum considering the direct anatomical relation to the right kidney anteriorly, which was seen in our patient (figure 2). Small bowel intussusception or obstruction are also possible presentations. As reported in nearly all RCC GIB case reports, embolization of celiac, mesenteric, intercostal, or lumbar branches is required as endoscopic approaches are rarely successful at controlling bleeding. We acknowledge this is rare and present this case as an unusual cause of gastrointestinal hemorrhage. 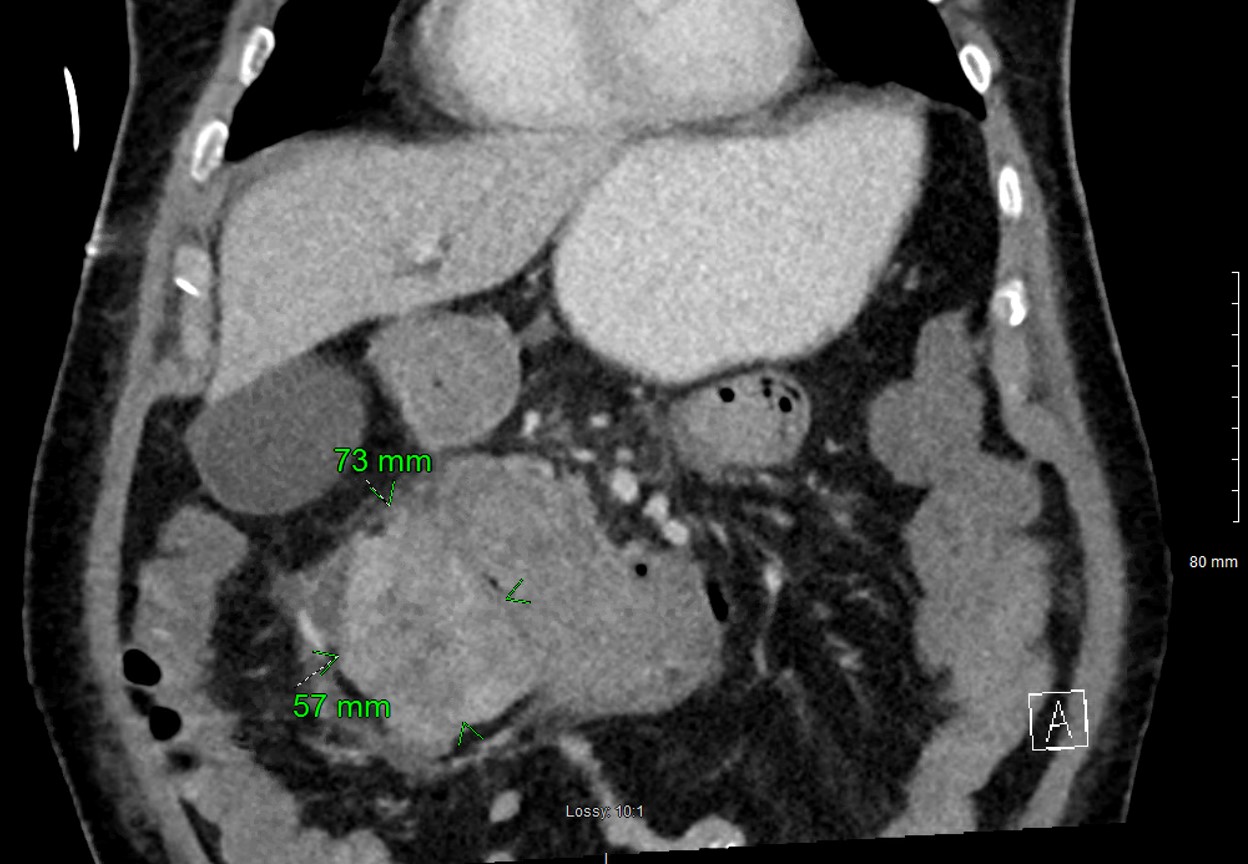 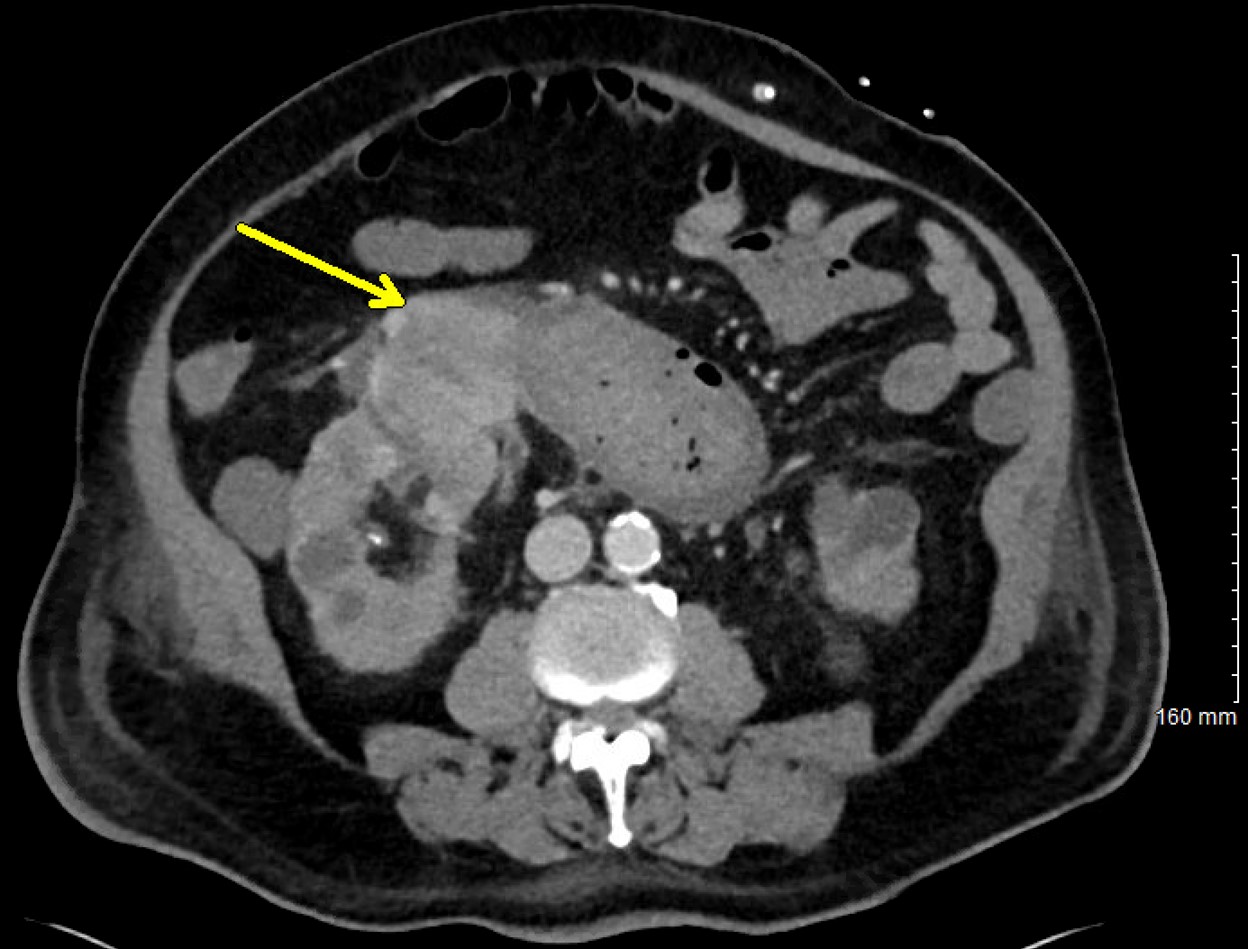 RENAL CELL CARCINOMA – A RARE CAUSE OF GASTROINTESTINAL BLEED.