Background: Patients hospitalized with hematologic malignancy are particularly vulnerable to infection. Clostridium difficile infection (CDI) has become the most common cause of healthcare-associated infections in U. S. hospitals, and the excess healthcare costs related to CDI are estimated to be as much as 4. 8 billion dollars for acute care facilities alone. We sought to determine the risk of CDI in hospitalization with multiple myeloma (MM) along with its trends, outcomes, and predictors using a national representative database.

Methods: The Nationwide Inpatient Sample (NIS) from January 2010 to September 2015 was used for the study. We identified all patients aged 18 years or older with a diagnosis of MM using the International Classification of disease, Ninth Revision, Clinical Modification codes. we identified trends in the annual rates of CDI in MM using negative binomial regressions with robust error variance. We performed multivariate logistic regression to determine the independent risk factors of CDI in MM and compared the outcomes between those with or without CDI using propensity score method- inverse probability weighing to adjust for baseline covariates.

Results: In our cohort (n = 114,249) study, 45. 96 % are female, 54. 04% male had MM. CDI was present in 3. 1 % MM patients. The number of CDI increased over the study period with an average rate of 3. 27% per year. However, the mortality rate decreased over the same period with an average rate of 10% decrease per year. Stem cell transplantation, neutropenia, inflammatory disease/status, atrial fibrillation and chronic renal failure were independent predictors of CDI in MM patients. After adjusting for covariates, patients with CDI have prolonged hospital stay, mortality and significant increased odds of acute kidney injury, acute kidney injury requiring hemodialysis and significantly increased hospital cost.

Conclusions: We found increased mortality among CDI patients compared to those without. We also identified stem cell transplantation, neutropenia, inflammatory disease/status, atrial fibrillation and chronic renal failure as independent predictors for CDI in patients admitted with MM. The results provide a rationale for the development of more effective approaches to preventing healthcare associated CDI in MM.

IMAGE 2: Predictors of CDI among patients with MM 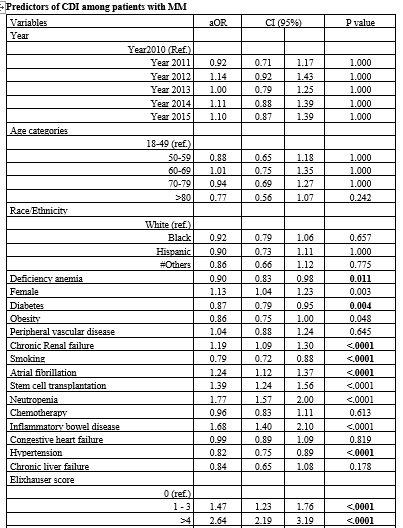