Case Presentation: A 62-year-old female with a history of polycythemia vera presented to urgent care with swelling, redness, and pain over her right foot and ankle. She denied any trauma or insect bites. She was diagnosed with cellulitis and treated with intravenous Ceftriaxone for 3 days with minimal improvement. She continued therapy with oral Cefpodoxime, but within 4 days developed swelling, redness, and pain in the contralateral foot and ankle. A few more days later, she experienced shortness of breath, chest pressure, and worsened swelling of bilateral feet and ankles. She was referred to the hospital for further work-up.
In the hospital, she reported an unintentional 50 pound weight loss and night sweats over the past year. Laboratory workup revealed: leukocyte count 17,000/μL, hematocrit 29.2%, platelets 91,000/μL, mean corpuscular volume (MCV) 75 fL, erythrocyte sedimentation rate (ESR) 92mm, and C-reactive protein (CRP) 379 mg/L. Imaging studies: negative CT Angiogram Chest for pulmonary embolus, negative bilateral ankle ultrasound for abscesses, and negative bilateral ankle x-rays for fractures. Additional tests negative for: rheumatoid factor (RF), antinuclear antibodies (ANA), angiotensin converting enzyme (ACE), anti-streptolysin titer (ASO), tuberculosis quantiferon, rapid plasma reagen (RPR), lyme PCR, babesia PCR, anaplasma PCR, and blood parasites. A manual differential showed 7% blast cells and 51% monocytes, and flow cytometry returned positive for acute myelomonocytic leukemia (AMML). Given the above negative workup and new diagnosis of a malignancy, she was presumed to have RS3PE and treated with prednisone, which completely resolved her distal extremity swelling.

Discussion: RS3PE, or Remitting Seronegative Symmetrical Synovitis with Pitting Edema, is a rare syndrome with an unknown epidemiology. RS3PE has been reported with both solid tumors and hematologic malignancies. However, it can occur alone or in conjunction with rheumatic diseases. RS3PE is characterized by acute, symmetrical pitting edema of distal extremities and a negative serum rheumatoid factor. It typically has a predilection for men (at a rate of approximately 2:1) and older adults, and it resolves completely with steroid therapy.

Tanega et al. analyzed 59 case reports of RS3PE and cancer from 1981-2009 and found that RS3PE preceded the diagnosis of cancer in 75% of the cases. But the incidence with acute leukemia is unknown. The same study found only 1 case of RS3PE associated with AML.

It is important to note that our patient presented for medical care only after developing lower extremity edema. In our case, RS3PE was the heralding sign for an underlying malignancy even though it was recognized after the diagnosis of the cancer.

Conclusions: More studies need to be done to elucidate the epidemiology of RS3PE in the cancer population. Clinicians should learn to recognize the signs and symptoms of RS3PE, and initiate a search for occult malignancies in all patient suspected of RS3PE. 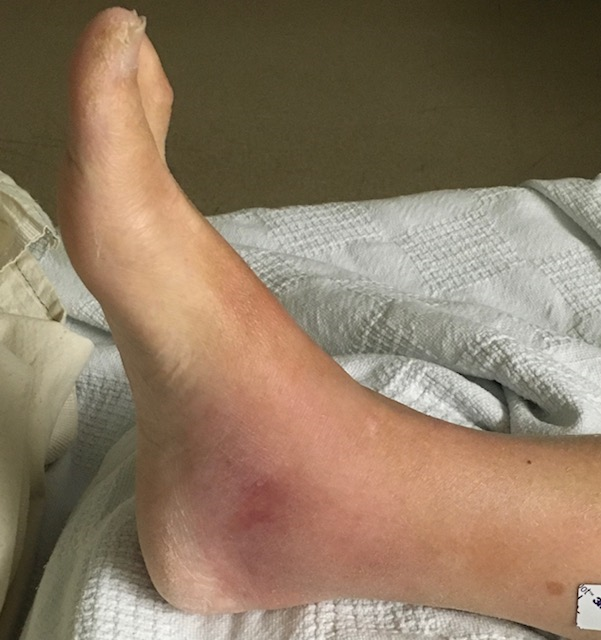