SEVERE PECTUS EXCAVATUM: A RARE AND ABRUPT PRESENTATION IN ADULTHOOD

Case Presentation: A 21-year-old previously healthy female presented with a myriad of symptoms including one month of unintentional 20-pound weight loss, dyspnea with minimal exertion, syncopal episodes, palpitations, nausea, and vomiting. Prior to this, she had occasional syncopal episodes throughout her life but was athletic and participated in track in high school. Three months ago, she had Covid-19 and her only symptom was loss of taste and smell. On physical exam, she was found to have severe pectus excavatum (Figure 1). While in the ER, she desaturated to 84% during a 6-minute walk test and was admitted for workup. Chest X-ray was unrevealing and notably did not demonstrate evidence of Covid-19 fibrosis; echocardiogram showed normal heart chambers and valves and normal systolic and diastolic function; CT chest with contrast showed severe chest wall deformity resulting in a mild leftward mediastinal shift and mass effect on the right atrium and ventricle (Figure 2). Two days after admission, while brushing her hair, she had two episodes of supraventricular tachycardia lasting 10-15 minutes. Thoracic surgery was consulted, and surgical repair of pectus excavatum was recommended. She was subsequently discharged with home oxygen, metoprolol tartrate, and a 48-hour Holter monitor. Outpatient pulmonary function tests revealed a mild restrictive ventilatory defect. Five months later she successfully underwent the Nuss procedure to correct her pectus excavatum, in which a metal bar was placed under her ribcage to reshape her chest. At her 2-week post-operative visit her dyspnea on exertion had improved significantly. She was no longer using home oxygen and metoprolol was discontinued.

Discussion: Historically, pectus excavatum was widely regarded as merely a cosmetic issue that was optionally treated with surgical correction during childhood [1]. More recent studies have revealed that significant defects can restrict lung expansion and compress the heart, prompting newer recommendations for symptomatic patients to receive surgical treatment in late adolescence [2]. There is limited research on performing the Nuss procedure on adults [3], and scant data on the relationship between pectus excavatum and syncope [4][5]. Moreover, there have only been a few reported cases of cardiac arrhythmias in a patient with pectus excavatum with normal heart structure, as was the case in our patient [6][7][8]. In addition, patients with pectus excavatum typically experience worsening symptoms in adolescence due to growth spurts [9], whereas our patient presented with an abrupt onset of symptoms as an adult, accompanied by unexplained features such as dramatic weight loss and vomiting.

Conclusions: Our patient presents a unique clinical picture of uncorrected severe pectus excavatum characterized by a sudden onset of classic features in addition to rare features such as syncope and arrhythmia. It is important for hospitalists to recognize pectus excavatum as a potential cause of exertional dyspnea, palpitations, and syncope, rather than an incidental cosmetic finding. Clinicians should be aware that patients who become symptomatic later in life typically have good outcomes with surgical intervention even in adulthood [10]. 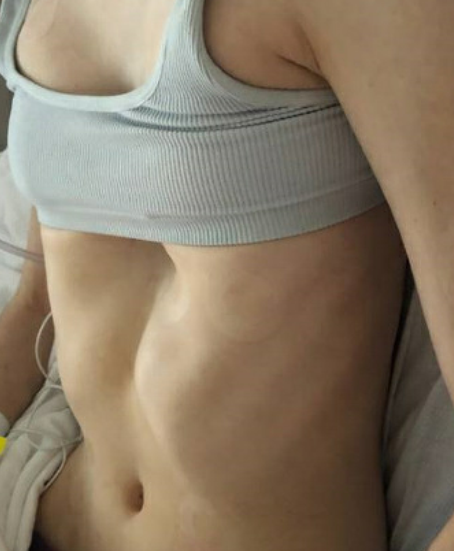 IMAGE 2: Figure 2. Compression of the right atrium and right ventricle identified on CT chest with contrast 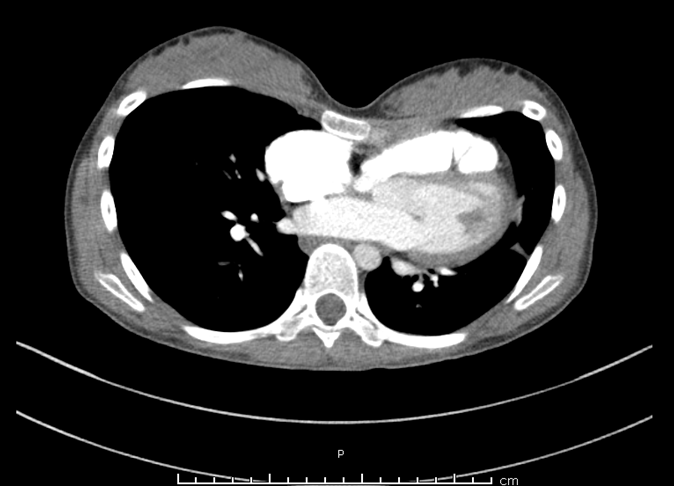 SEVERE PECTUS EXCAVATUM: A RARE AND ABRUPT PRESENTATION IN ADULTHOOD.