SPOTS AND ANEMIA, LYME AND BABESIA!

Case Presentation: A 69-year-old female with no significant past medical history presented with three weeks of intermittent fevers followed by 24-hours of persistent fever associated with nausea, fatigue, and malaise. She lived in the metro-Boston area and worked part-time as a dog-walker. She reported a tick bite several weeks ago. Vital signs were notable for a temperature of 38.4F. An erythematous rash was seen on her left upper thigh. Laboratory investigations were remarkable for: ALT 204 U/L, AST 192 U/L, alkaline phosphatase 217 U/L, total bilirubin 1.2 mg/dL, direct bilirubin 0.3 mg/dL, hematocrit 32.8%, platelet count 81,000/mm3, haptoglobin 23 mg/dL, lactate dehydrogenase 424 U/L, and a reticulocyte count of 2.3%. Peripheral blood smear revealed intra-erythrocytic ring forms consistent with Babesia (Figure 1). The patient was started on atovaquone and azithromycin. The following morning she was noted to have multiple erythematous rashes on her left upper thigh and groin, back, and right shoulder, including one with central clearing, consistent with erythema migrans, and thus was started on doxycycline to treat Lyme Disease. After discharge, Lyme Disease serologies showed a negative IgG and a positive IgM confirming the clinical diagnosis of early-disseminated Lyme Disease. Anaplasma DNA was negative.

Discussion: Although hospitalists are increasingly familiar at recognizing and diagnosing tick-borne illnesses given their increasing incidence in the United States, co-infection with multiple tick-borne pathogens are often unrecognized. The same tick, Ixodes scapularis, transmits Babesiosis, Lyme Disease, and Anaplasmosis with rates of co-infection in endemic areas of up to 28%. While these diseases present similarly with fever and malaise, each is associated with a different pattern of laboratory abnormalities, which can help in the identification of co-infections (Table 1). Patients with Babesiosis often present with hemolytic anemia and thrombocytopenia, as was seen in this patient. Both Lyme Disease and Anaplasmosis are associated with elevated transaminases, which was also seen in this patient and was a clue to her co-infection. Anaplasmosis is often associated with leukopenia. In addition to recognizing characteristic laboratory abnormalities, having a high clinical suspicion of co-infection is important as early-disseminated Lyme Disease is a clinical diagnosis; serologies can be confirmatory, but may be negative until later in the disease course. Empiric treatment for Lyme Disease and Anaplasmosis should also be considered in patients with a diagnosis of Babesiosis who fail to improve after 48 hours of appropriate antibiotic therapy.

Conclusions: Understanding the frequency of co-infection among tick-borne diseases and recognizing the unique laboratory features of each is important for early recognition and treatment of these illnesses. 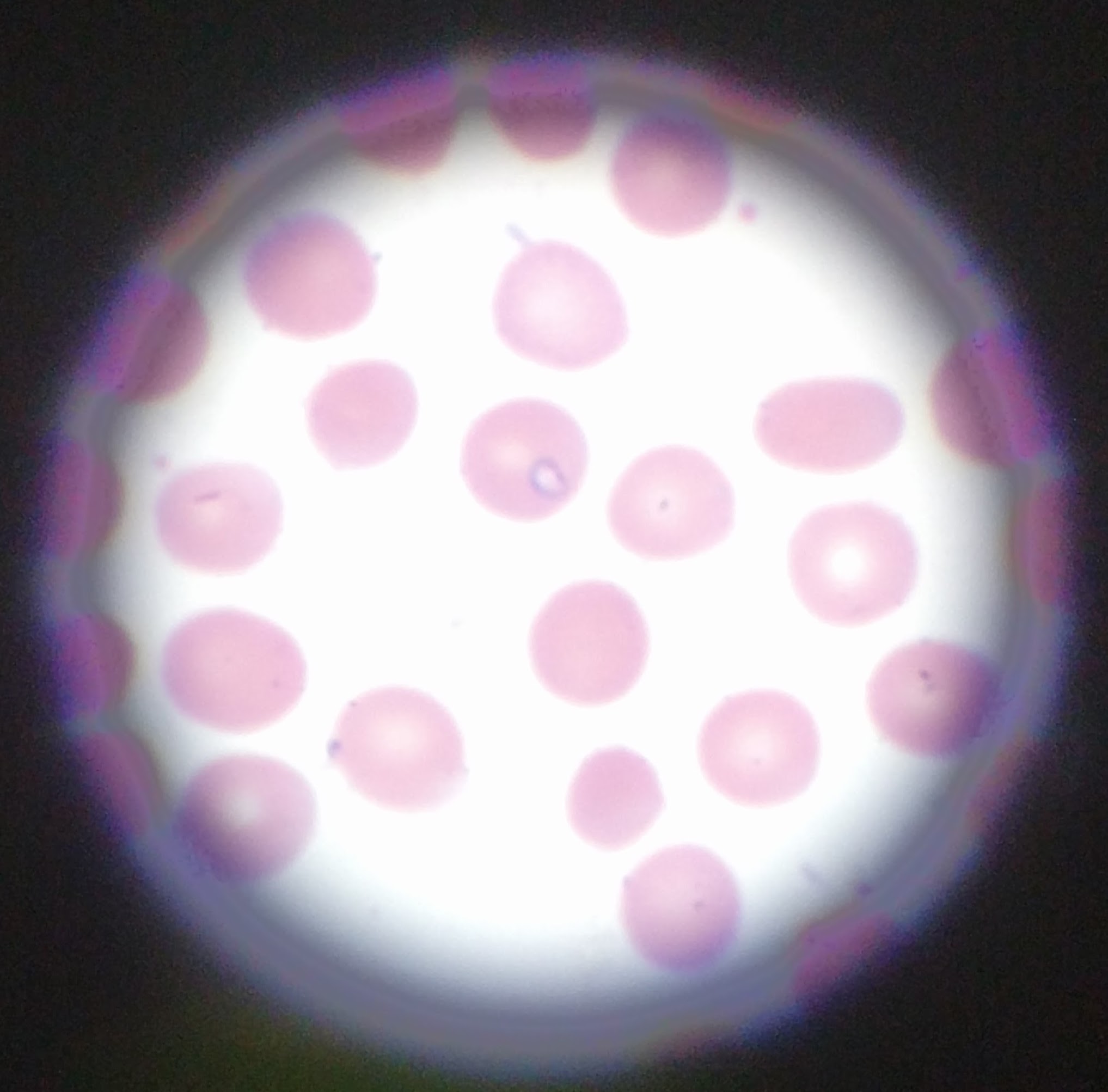 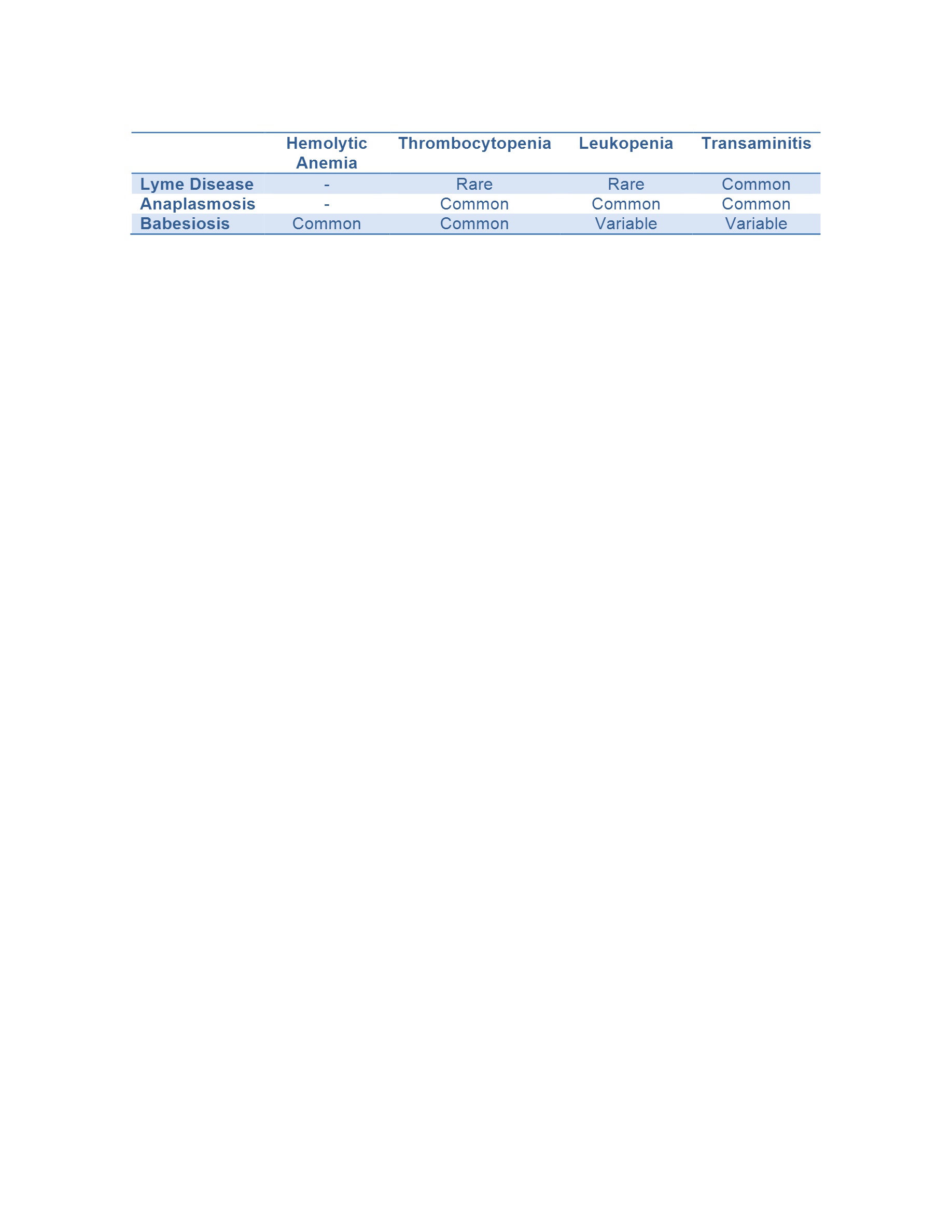 SPOTS AND ANEMIA, LYME AND BABESIA!.