TAKING IT IN STRIDOR – WHATS CAUSING MY TROUBLE BREATHING?

Case Presentation: A healthy 3 year-old male from Arizona was seen in outpatient ENT clinic for 2.5 weeks of intermittent stridor, hoarse voice, barky cough, and 1 day of increased work of breathing. He had previously been evaluated on 4 separate occasions by his pediatrician or the emergency department. Each time, he was treated for presumed viral croup with temporary improvement of his symptoms. Imaging of his neck with x-ray and computerized tomography was remarkable only for subglottic edema. He had been afebrile, tolerating oral intake, and had no recent history of strep throat or viral symptoms. In ENT clinic, a flexible laryngoscopy revealed frank purulent secretions in the laryngeal inlet. The patient was directly admitted for further evaluation, monitoring, and treatment. He was started on Unasyn to empirically treat bacterial infection and IV Decadron to minimize airway edema. He underwent laryngoscopy the next morning and was found to have a subglottic granuloma (Figure 1) that was debrided and sent for pathology and cultures. He had no stridor or difficulty breathing post operatively and was discharged home on Cefdinir after his tissue culture grew Staph Aureus. 4 days after discharge, the granuloma pathology report (Figure 2) returned showing Coccidioides spherules and he was started on Fluconazole. He had negative complement fixation titers and antibodies at both 2 weeks and 2.5 months after starting antifungal treatment. A flexible laryngoscopy 1 month after discharge showed no further granuloma tissue. He was followed by the outpatient Coccidiomycosis clinic and his fluconazole was stopped after 3 months of therapy and complete resolution of symptoms.

Discussion: Coccidioidomycosis is a fungal infection caused by Coccidioides which is endemic to the lower deserts of the southwestern United States. Primary disease, usually localized to the lungs, is caused by inhalation of fungal spores. Most patients are asymptomatic or have only mild pulmonary symptoms with dissemination and non-cutaneous extrapulmonary manifestations occurring in fewer than 2% of cases. Laryngeal coccidiomycosis has been reported in roughly 6% of cases with extrapulmonary manifestations. In children, it can present with progressive stridor, dyspnea, or hoarseness with findings of granulomatous lesions on the vocal cords or subglottic tissue. There are several proposed mechanisms of laryngeal infection. Laryngeal tissues can be directly inoculated by inhaled spores or infected sputum, or can arise by extension from infected lymph nodes. Positive fungal cultures or spherules on pathology can confirm diagnosis. Serologic testing and complement fixation titers can be monitored to assess response to therapy and some studies have shown that high or rising titers are associated with more severe and disseminated disease. Antifungal therapy is indicated in pediatric infections to reduce severity of disease and likelihood of dissemination. Fluconazole is the preferred treatment due to its bioavailability and blood brain barrier penetration.

Conclusions: This case highlights the importance of maintaining a high index of suspicion and avoiding premature diagnostic closure. This patient was repeatedly treated for croup despite lack of viral symptoms and persistence of stridor. Although rare, laryngeal coccidioidomycosis should be considered in endemic areas in patients presenting with recurrent stridor, vocal changes, and signs of airway obstruction. 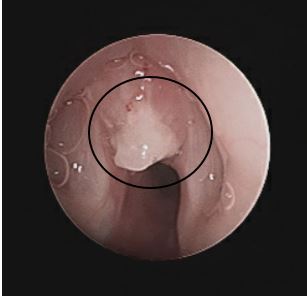 IMAGE 2: Figure 2: Pathology Report of Subglottic Granuloma. Figure 1A shows hyperplastic polypoidal squamous mucosa with ulcers and granulomatous inflammation. Figure 1B and 1C show spherules on an H&E and Grocott Methenamine Silver stain respectively. Spherules, which are pathognomonic for Coccidioides, are parasitic structures which have a spherical shape and double membrane; they measure approximately 20 to 70 μm in diameter with average endospores of 2–5 μm in diameter.

TAKING IT IN STRIDOR – WHATS CAUSING MY TROUBLE BREATHING?.