Written Signout Tool based on I-PASS: Does it PASS the Test?

Background: Transitions of care are known to be high-risk times in healthcare, largely due to communication errors between providers. Prior studies have shown a direct relationship between poor signout practices and adverse events. Verbal handoff tools, such as I-PASS, have been created in efforts to facilitate the signout process. An important aspect of the handoff process is the written signout. While several studies demonstrate the efficacy of I-PASS as a verbal handoff, few have examined I-PASS explicitly as a written signout tool.

Purpose: The purpose of this study was to implement a written daily signout tool on a resident teaching service based on I-PASS and assess the quality, utilizing resident survey data as well as faculty evaluation guided by published rubrics.

Two hospitalist attendings evaluated the written signouts based on two published rubrics, the “UPDATED approach” and the “Faculty” scale, with scores 7 and above on both scales indicating superior signouts. Average UPDATED approach score rose from 6.5 to 8.4 (p=0.000) by one reviewer and from 5.5 to 7.6 (p=0.000) from the other reviewer after implantation of the I-PASS. Similarly, Faculty scale scores rose from 5.9 to 7.3 (p=0.038) from one reviewer and 7.1 to 8.1 (p=0.003) from the other reviewer after implementation.

Conclusions: Implementation of a written signout tool that incorporated the elements of I-PASS resulted in multiple areas of improvement, including anticipatory guidance and the identification of sick patients. Moreover, residents found the I-PASS tool faster to complete than the previous signout tool and had higher overall satisfaction. Faculty evaluation of written signouts also demonstrated increased completeness of written signouts after the adoption of I-PASS. 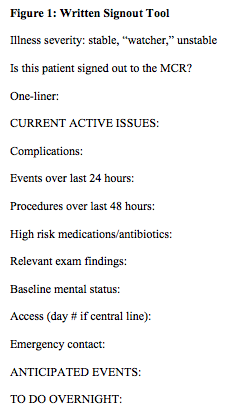 Written Signout Tool based on I-PASS: Does it PASS the Test?.