ACCURACY OF LUNG ULTRASOUND VERSUS CHEST X-RAY IN THE DIAGNOSIS OF PULMONARY EDEMA: A SYSTEMATIC REVIEW

Background: Lung ultrasound (LUS) is emerging as a useful diagnostic tool for several lung pathologies. Some studies have found its accuracy in diagnosing pulmonary edema surpasses that of chest x-ray (CXR) but the available evidence is conflicting. CXR currently receives a Class I recommendation by the AHA in the evaluation of decompensated heart failure. Given the many advantages of the LUS, including ease of acquisition, lack of ionizing radiation and immediate availability of results, demonstrating comparable or superior accuracy relative to CXR could have important implications for standard of care. We undertook a systematic review to provide an overview and analysis of the available evidence comparing the accuracy of LUS to CXR in the diagnosis of pulmonary edema.

Methods: This study was conducted in adherence with PRIMSA and Cochrane guidelines for systematic reviews of diagnostic test accuracy. A comprehensive literature search of MEDLINE, Embase, and Cochrane Library databases was performed in May 2017. Inclusion criteria required a prospective cohort of adult patients who underwent both LUS and CXR, the results of which were compared to a gold standard diagnosis of heart failure made by an expert on retrospective chart review. Forest plots, evaluation of I2 and summary receiver operating curves (SROC) were performed to assess for and explore heterogeneity.

Results: Our initial search yielded 1520 citations of which 4 studies (published between 2011 and 2017) were eligible for inclusion, representing a total of 1542 adult patients who presented to the emergency department for dyspnea. Two included studies did not provide overall sensitivity (sen) and specificity (spec) for CXR but instead presented them for individual CXR findings. In both cases, the highest estimates for sen and spec among all reported CXR findings were used in the analysis.
For LUS, estimates of sen and spec among included studies ranged from 0.63-0.97 and 0.79-0.94 respectively. For CXR, estimates ranged from sen: 0.71-0.78 and spec 0.80-0.98.

Conclusions: Our preliminary findings suggest LUS has comparable accuracy relative to CXR for pulmonary edema though there is significant heterogeneity between study estimates that requires further evaluation. Given its many advantages over CXR, LUS demonstrates promise as a tool to detect pulmonary edema. More research is needed to further characterize its role in the diagnosis and management of decompensated heart failure. 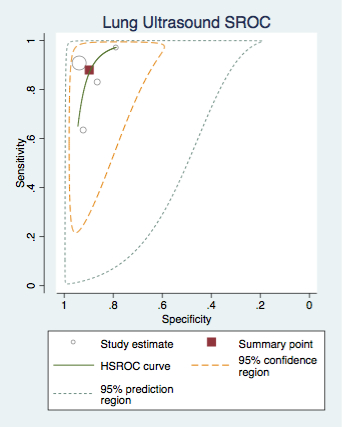 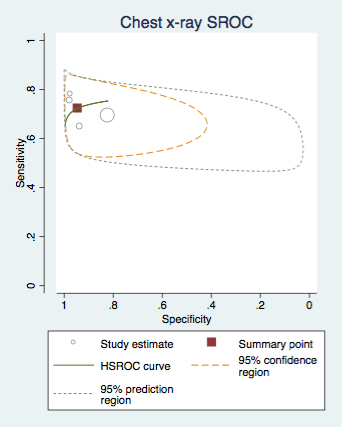 ACCURACY OF LUNG ULTRASOUND VERSUS CHEST X-RAY IN THE DIAGNOSIS OF PULMONARY EDEMA: A SYSTEMATIC REVIEW.