AN ATYPICAL PRESENTATION OF MUCORMYCOSIS IN AN IMMUNOCOMPETENT HOST

Case Presentation: A 78-year-old female with controlled type 2 DM (A1C 7%, diet control), hypertension and left-eye glaucoma with resultant vision loss was initially admitted for atypical chest pain. She reported unintentional weight loss of 30 pounds in three months and progressive blurry vision of her right eye for 4 months, which had been evaluated extensively by her ophthalmologist. Workup at that time was only significant for the known right-sided small meningioma of 1cm on brain MRI, which was done 2 months prior to hospitalization. Acute coronary syndrome was ruled out, but the patient was found to have persistent hyponatremia with serum sodium level ranging 122-124, consistent with SIADH. On hospitalization day 3, the patient had acutely deteriorated vision in the right eye with associated right-sided headache. She also developed proptosis of the right eye. Head CT showed compression of the right optic nerve at the orbital apex concerning for a soft tissue mass and was initially thought to be a CNS tumor. A biopsy was taken and confirmed the diagnosis of Mucor. Aggressive surgical debridement of involved tissues in any form of mucormycosis is in general recommended, yet due to the location and nature of the mass, excision was not possible in this case. The patient was started on daily liposomal Amphotericin B infusion. She had profound hypokalemia during her treatment, requiring a total of 150mEq of potassium repletion every day. Her hyponatremia improved and her renal function remained stable during hospitalization. Her headaches resolved yet she did not regain vision in the right eye.

Discussion: Mucormycosis is an opportunistic fungal infection seen in immunocompromised patients, uncontrolled diabetes is a common predisposing condition (particularly in patients with DKA). The infection is caused by fungi of the order Mucorales (1). Hyperglycemia predisposes to mucormycosis infection by disrupting neutrophilic phagocytosis (2). Because of the significant morbidity and mortality associated, prompt diagnosis and treatment are paramount. Our patient has the diagnosis of Rhino-orbital-cerebral mucormycosis which is the most common and aggressive form, yet she has had no local pain until after 4 months of progressive loss of vision, which is atypical (3) The prognosis of mucormycosis is generally poor. In one of the only major reviews of survival in mucormycosis infections, the survival rate was 60% overall.1 Diabetics without ketoacidosis had an improved prognosis with a survival rate of 76%.1 There’s no data concluding the chance of recovery of vision in patients with Rhino-orbital-cerebral mucormycosis after treatment. One aspect of our case presentation that has not been explicitly reported in the literature to our knowledge is an association between mucormycosis and profound hyponatremia. A direction for further research could entail if profound hyponatremia can be a useful prognostic indicator for mucormycosis.

Conclusions: In our case, it is still unclear why our patient has Mucor infection. Interestingly, she did later endorse a history of gardening, mixing her own soils and fertilizer. Since the fungal spores are found on decaying vegetation, mold and in the soil, mixing her soil potentially increased her risk of infection despite the fact that she did not have other host predisposing conditions except her well-controlled type 2 DM. Clinicians should consider mucormycosis as one of the differential diagnoses in any diabetic patient who presents with unexplained progressive visual loss. 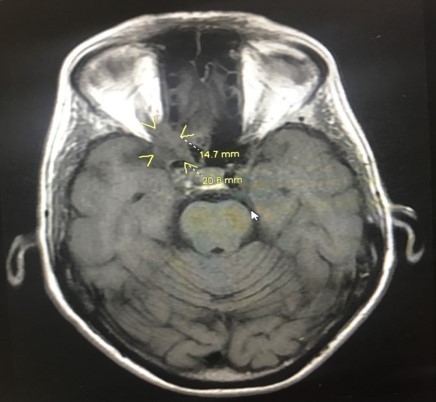 IMAGE 2: Branching nonseptate hyphae associated with mucormycosis in a biopsy specimen of our patient. 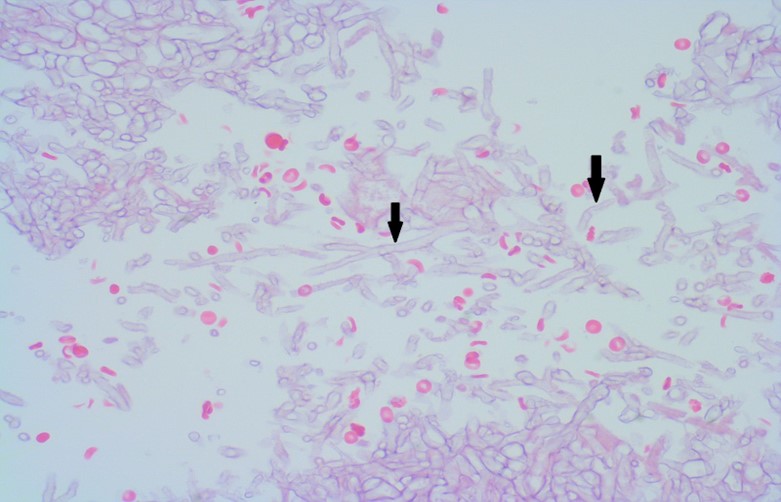 AN ATYPICAL PRESENTATION OF MUCORMYCOSIS IN AN IMMUNOCOMPETENT HOST.