CELLULITIS IN YOUNG INFANTS: A SURVEY STUDY ON MANAGEMENT PRACTICES

Background: The management of cellulitis in young infants has not been well-studied and appears to be largely variable. Infants with cellulitis often present without fever and only skin findings, with only a small minority having invasive infection. There is no consensus on the need for admission and further workup, such as a lumbar puncture. The optimal antibiotic regimen is not defined and inconsistently involves anti-Staphylococcal agents. The aim of this study is to describe practice patterns of providers who manage young infants with uncomplicated cellulitis. By looking at management under ideal hypothetical circumstances, we can move towards establishing better guidelines and standardization of care in young infants with uncomplicated cellulitis.

Methods: This was an internet-based anonymous survey amongst pediatric physicians at a tertiary pediatric center. The survey included four scenarios of a well-appearing infant. The infant had uncomplicated cellulitis, was either 17 days and 52 days old, and presented either with or without a fever. For each scenario, the survey asked about diagnostic evaluations, disposition (admission versus discharge), and the choice of antibiotic(s). The data was analyzed using descriptive statistics and chi-square test.

Conclusions: This survey study of pediatric physicians looked at the perceived optimal management of a young infant with uncomplicated cellulitis. Significant variability in management existed based on the age of the infant as well as the presence of fever. The majority of physicians recommended admission for the febrile 17-day infant reflecting consensus in febrile neonate guidelines, however considerable variability existed in the afebrile 17-day infant and the 52-day infant (both with and without fever), in which less than half of participants requested admission. Similar differences were seen in the request for a lumbar puncture. In antibiotic choice, there was a clear shift away from ampicillin in the older age group, which is consistent with current guidelines. However, the use of clindamycin in nearly half of the older infants compared to less than a quarter of the younger infants demonstrates an interesting shift in the perceived need for anti-staphylococcal coverage based on age. 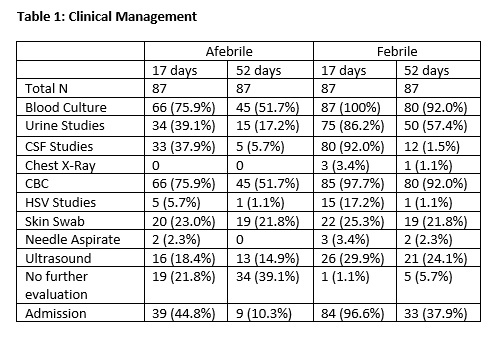 CELLULITIS IN YOUNG INFANTS: A SURVEY STUDY ON MANAGEMENT PRACTICES.