“I’M NOT PULLING YOUR LEG!” PERPLEXING PAIN IN A PATIENT WITH DIABETES

Case Presentation: A 59 year-old man presented with one week of progressive pain, swelling, and weakness of the right lower extremity. The pain was most severe in his right thigh, hip, and buttocks. He also developed numbness of the right foot and ankle. He reported no leg trauma, incontinence, or new medications. His past medical history included hypertension, Type II diabetes mellitus, peripheral vascular disease, coronary artery disease, three prior myocardial infarctions, stroke, and avascular necrosis of the hips status post bilateral arthroplasties. Medications included aspirin 81mg, ticagrelor 90mg, rosuvastatin 40mg, metformin 500mg twice daily, insulin 75/25 20 units twice daily.His vital signs were normal. His right thigh was exquisitely tender to palpation in the anterior and lateral compartments. There was no rash, erythema, or lymphadenopathy. He did not have sensation to light touch of the right foot or shin. He had 3/5 strength in the right lower extremity.Labs revealed a white blood cell count of 10.7, a creatinine of 0.8, a creatinine kinase of 1505, normal liver enzymes, an erythrocyte sedimentation rate of 52, and a C-reactive protein of 83. A recent hemoglobin A1c was 6.2%. Radiographs of his right leg were unremarkable. An ultrasound of the right lower extremity showed no deep venous thrombosis. CT right thigh revealed diffuse subcutaneous edema and stable hip prosthesis without hardware complication. Orthopedic surgery did not suspect compartment syndrome on exam, and felt hematoma was likely given his history of antiplatelet therapy. Neurology considered statin-induced myositis and recommended electromyography, which revealed a distal axonal polyneuropathy, without evidence of an inflammatory myopathy. MRI of the right thigh showed edema within the vastus lateralis, vastus medialis, and gluteus maximus musculature compatible with myonecrosis (Figure 1). Rheumatology did not suspect autoimmune myonecrosis, given EMG findings and exam. A fine needle muscle biopsy was negative for infection. As the patient was on anti-platelet agents, he did not undergo open muscle biopsy. Endocrinology affirmed the final diagnosis of diabetic myonecrosis and recommended supportive treatment with pain control, rest, and glycemic control.

Discussion: Hospitalists encounter patients with diabetes mellitus daily, and are well-versed in the diagnosis and management of its common manifestations. Diabetic myonecrosis is an unusual complication, characterized by spontaneous ischemic necrosis of skeletal muscle in patients with Type I or Type II diabetes (1). It mimics other conditions such as skin and soft tissue infections, deep venous thrombosis, malignancy, and inflammatory or drug-induced myositis. MRI is the preferred diagnostic test (2). Muscle biopsy may help rule out other causes, but prolongs recovery time (3). There is no treatment for diabetic myonecrosis. Symptoms self-resolve with rest, but there is a high rate of recurrence (4).This patient’s MRI findings were pathognomonic for diabetic myonecrosis. His right foot numbness was likely secondary to nerve compression from subcutaneous edema of the thigh.

Conclusions: Diabetic myonecrosis is an uncommon and underrecognized complication of diabetes mellitus. It is diagnosed by MRI after excluding other causes. Biopsy should be avoided except in equivocal cases, as it prolongs recovery time. Treatment is supportive with rest and analgesia, and glycemic control. 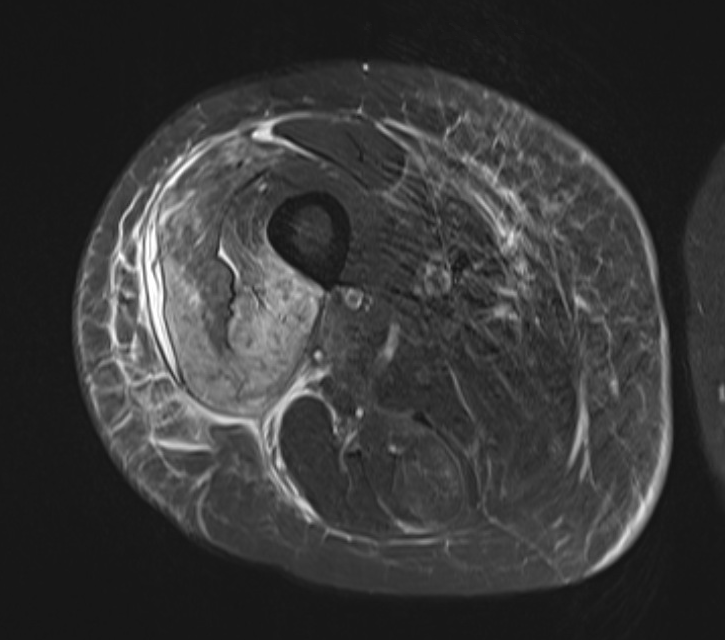 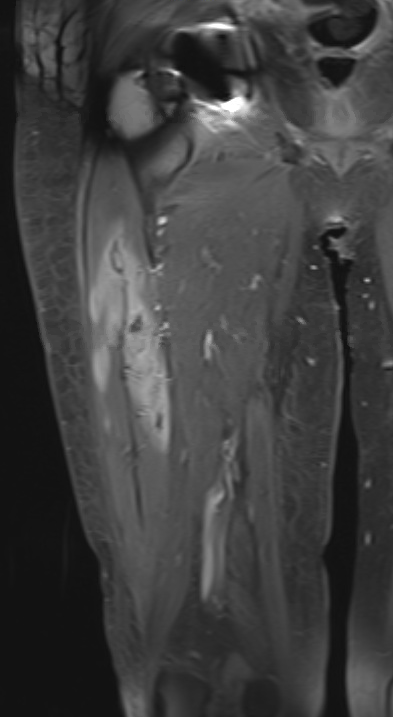 “I’M NOT PULLING YOUR LEG!” PERPLEXING PAIN IN A PATIENT WITH DIABETES.