Case Presentation: A 40-year-old male presented to the emergency department with complaints of back pain for 3 weeks. He described the pain as aching and circumferential involving the sternum, right ribs, shoulders, and back. His previous medical history was unremarkable and he never had any prior imaging studies. Plain radiographs of the spine did not show any osseous abnormalities. Because of the patient’s highly elevated alkaline phosphatase (1,051 IU/L), a computed tomography (CT) scan of the chest, abdomen, and pelvis was performed (figure 1). This revealed an enhancing right upper pole renal mass suspicious for renal cell carcinoma with nodal, left adrenal and extensive bony metastasis. In the chest, there were extensive lytic and sclerotic bone metastases. Interventional Radiology performed a CT guided core biopsy of one of the metastatic lesions in the left iliac crest; cytology reported metastatic malignant cells with immunohistochemical findings positive for Ae1/Ae3 and PAX8. This was highly suggestive of metastatic renal cell carcinoma, however, the specific histological subtype (clear cell vs non-clear cell) was not identified due to an insufficient tissue sample from the earlier core biopsy. A subsequent positron emission tomography (PET) scan revealed extensive metastases with multiple soft tissue implants, retroperitoneal lymph nodes and extensive osseous involvement (figure 2). The patient was scheduled for a repeat core biopsy (retroperitoneal) for a more specific histological diagnosis (clear cell vs non-clear cell) on the demand of the treating oncologist and commenced on treatment with Sunitinib in the interim.

Discussion: The skeleton is the most common organ to be affected by metastatic cancer; bone metastases from carcinomas of the breast, lung, prostate, kidney, and thyroid are most frequent. Although RCC commonly metastasizes to the spine, malignancy in itself is rare in patients that present with back pain, having a prevalence of just about 1% in this patient population. The index of suspicion is even lower in patients younger than 50 years with back pain less than 4 weeks in duration, and who do not have a previous history of cancer as in our patient which makes this case unique. Although many advocate the selective use of laboratory and imaging studies for back pain patients, the early detection of cancer may be an important reason to obtain such tests. As the world’s population ages and the prevalence of risk factors increases, the burden of metastatic RCC (mRCC) is predicted to increase significantly. Metastatic RCC is one of the most treatment-resistant malignancies, outcomes are generally poor and median survival after diagnosis is less than one year. Treatment is usually determined by the histological subtype (clear cell vs non-clear cell) and is currently based on the use of vascular endothelial growth factor inhibitors (such as Sunitinib) and immunotherapy (Nivolumab, Ipilimumab), however, response rates remain low and there is a great need for new therapeutic agents.

Conclusions: We describe a rare case of diffusely metastatic renal cell carcinoma in a 40-year-old Hispanic male initially presenting as isolated back pain with mixed osseous metastases which is a very rare presentation of mRCC. Even among younger patients who present with back pain but do not have the traditional red flags to suspect malignancy, it is crucial that providers conduct a thorough history and physical examination and use clinical judgment to identify patients with severe underlying conditions. 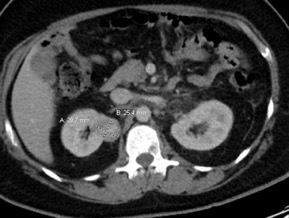 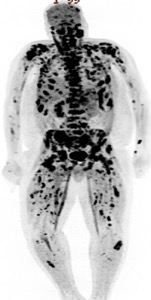 ISOLATED BACK PAIN AS AN INITIAL PRESENTATION OF DIFFUSELY METASTATIC RENAL CELL CARCINOMA.