Case Presentation: A 54-year old man with active cocaine use and untreated hepatitis C presented with fever and rash. He last smoked cocaine 4 days prior to admission. In the next several days, tender enlarging rashes appeared on the left arm and legs. On admission he was febrile (100.5 F) with HR of 101 and BP of 119/60. On the left arm were three 6-10 cm purpura with jagged edges rimmed by erythema with similar lesions on the legs (see Figure). The following pertinent tests were positive (see Table): cocaine in urine; Cr 1.5 (baseline 1.1) with an active sediment; P-ANCA (high titer); and anti-MPO & anti-PR3 (both low titer). The skin biopsy of the left arm lesion showed leukocytoclastic vasculitis with microthrombi. He was diagnosed with levamisole vasculitis (LV).

Discussion: Discovered in 1966, levamisole was first marketed as an anthelmintic in animals. When later found to have immunomodulatory property, levamisole was used to treat human immunologic diseases until its withdrawal from the US in 2000 for agranulocytosis. Levamisole was first found in cocaine as a bulking agent in 2001. Chemically and physically similar to cocaine, levamisole passes the “boiling test,” a street test for cocaine purity. By 2009, 69% of cocaine sold in the US had levamisole. LV in cocaine users was first reported in 2010. LV mainly affects the skin with a predilection for the tip of the nose, zygomatic arch, helix of the ear, and limbs. Its lesions are characterized by tender angulated purpura rimmed by erythema. Focal necrotizing glomerulonephritis (GN) and alveolar hemorrhage have been reported. Acute kidney injury with an active sediment in this patient was suggestive of GN. LV has a unique ANCA profile. Just as microscopic polyangiitis (MPA), LV produces a P-ANCA pattern, but the major target of ANCA in LV is human neutrophil elastase (HNE), not myeloperoxidase (MPO) as in MPA. Thus, despite a high p-ANCA titer, an anti-MPO titer in LV is normal or only minimally elevated. Because the anti-HNE recognizes an epitope on proteinase 3 (PR-3), an anti-PR3 titer is also elevated in LV. The co-presence of anti-PR3 and anti-MPO distinguishes LV from MPA or Wegener’s, the latter two positive for anti-MPO and anti-PR3, respectively. The skin biopsy shows leukocytoclastic vasculitis and thrombotic microangiopathy. Abstinence results in spontaneous resolution of skin lesions in a few weeks as was the case in our patient. Steroids have been used with severe skin and renal lesions with variable success.

Conclusions: With most cocaine sold in the US having levamisole, hospitalists will continue to encounter LV. Its unique skin lesions and ANCA profile can help distinguish LV from other ANCA vasculitis. 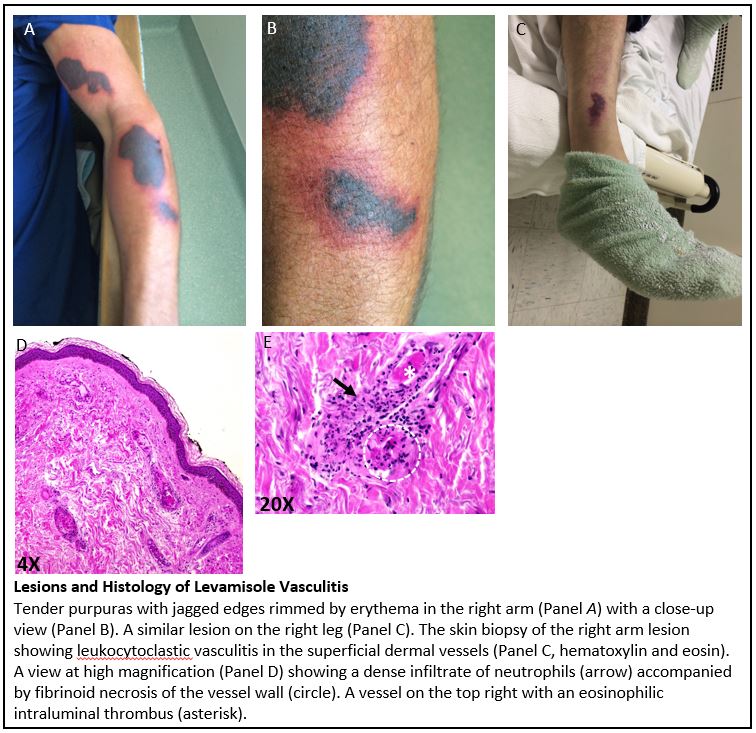 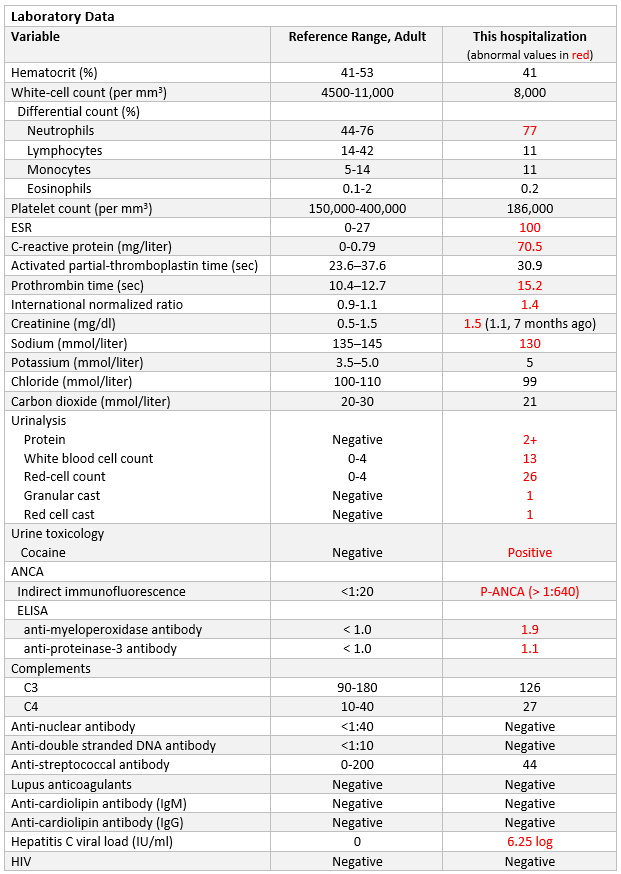