Background: Early identification of sepsis is the main driver for patient survival. Roughly 30% of patients diagnosed with severe sepsis do not survive. To drive the desired clinical behavior, it is crucial to identify appropriate sensitivity and specificity of a sepsis early detection system. At our institution, we saw a 515% increase in Sepsis Alerts when changing from a Severe Sepsis Alert to a Sepsis Alert model. We conducted a survey on staff nurses to evaluate perception of the current best-practice advisory (BPA) which resulted in 100% of respondents stating that the BPA erroneously triggers on patient’s not meeting sepsis criteria. A multidisciplinary group was convened to guide an eventual process change. We aimed to address the lack of sensitivity and broad specificity of the current Sepsis BPA. Improving the accuracy of the sepsis early warning detection system, will lead to improved quality of care and patient outcomes. Early and accurate diagnosis is key to improving sepsis outcomes which is why it is important to highlight and share our experience at the SHM Conference.

Purpose: Northwestern Memorial Hospital’s (NMH) current Sepsis Alert System is dramatically over-firing which has been shown in the literature to cause provider alarm fatigue which can lead to decreased responsiveness and identification due to the frequency of false positive alerts. To improve identification, the team decreased the sensitivity and increased the specificity to Severe Sepsis criteria, tighter SIRS plus organ dysfunction, which decreased alerts by 70%. Identifying sepsis early and accurately allows for prompt delivery of potentially life-saving treatment for our patients.

Description: The multidisciplinary team identified (2) root causes during a rapid improvement event. First, the current alert does not assist providers with identifying septic patients. The multidisciplinary group was given 4 different BPA algorithms ranging from sepsis, current NMH model, to severe sepsis criteria and had the opportunity to list positives and negatives of each model. The multidisciplinary team overwhelming voted in favor of the increased specificity: Severe Sepsis criteria, tighter SIRS plus organ dysfunction, given the complexity of our patients at an Academic Medical Center. The second root cause identified was the lack of provider education surrounding the alert. We addressed this via another multidisciplinary subgroup which consisted of nurses, physicians and our academy learning department which developed a comprehensive sepsis education E-learning module along with post assessment quiz.

Conclusions: In April 2018, the Sepsis Committee identified the Sepsis Best Practice Advisory (BPA) as a pain point which provided interruptions in care and did not accurately identify septic patients. By September 2019, the Severe Sepsis Best Practice Alert, tighter SIRS plus organ dysfunction, was launched and immediately the alert decreased by 70%. Additionally, the identification of patients coded with sepsis who received a BPA doubled from 8% to 15%. Of those patients, the percentage of patients screened as severe sepsis or shock increased by 1% which aligns with improved alert sensitivity and specificity. In a post survey to the nursing staff over 70% prefer the new alert and 59% are more concerned when the severe sepsis alerts fire that patients might be septic compared to 15% pre-intervention. Lastly, Northwestern Memorial Hospital had a 100% education and training participation across all units who receive the alert. 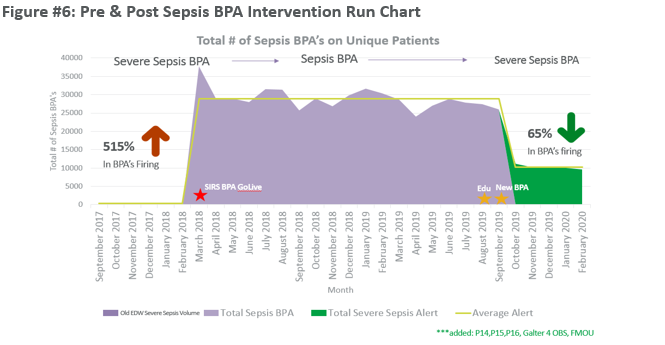