Case Presentation: 63 year old female with RA on methotrexate presented with a 2 week history of fevers (Tmax of 102), nausea, and multiple episodes of diarrhea. The patient denied any recent travel, sick contacts, or antibiotic use. On admission, CT abdomen/pelvis showed extensive enterocolitis as well as thrombocytopenia with platelets of 128K. Stool GI PCR returned positive for Campylobacter jejuni. She was admitted to medicine and started on azithromycin. By day 2, diarrhea persisted with worsening platelets to 7K. Leukopenia was also noted. The differential diagnosis was broad and included drug induced thrombocytopenia vs immune process vs underlying infection. No evidence of hemolysis was found. Thrombocytopenia transiently improved with platelet transfusion but drifted back down the following day. By Day 4, there was no improvement in the patient’s symptoms or thrombocytopenia, so azithromycin was switched to levofloxacin and IVIG was given. By Day 6, diarrhea began to improve, however platelets remained low, which prompted a second dose of IVIG. Bone marrow biopsy was unrevealing. By day 7, Platelets improved to 24K and continued to trend up over time. The patient completed a 7 day course of levofloxacin. Drug dependent antibody panel returned negative.

Discussion: Campylobacter jejuni infections are relatively common and can range from asymptomatic to severe colitis. Patients may report a history of ingestion of inadequately cooked poultry, unpasteurized milk, or untreated water. They often present with a prodrome of fever, headache, myalgia, crampy abdominal pain, watery and frequently bloody diarrhea. It is usually self-limited and the treatment involves adequate hydration and electrolyte repletion. The use of antibiotics to treat Campylobacter infections remains controversial but they’re sometimes employed in severe cases. Azithromycin is typically the first drug of choice but fluoroquinolones and tetracyclines can be used as second or third line agents.Campylobacter infections have rarely been associated with complications such as toxic megacolon, GIB, GBS, TTP, HUS, and thrombocytopenia. The mechanisms by which Campylobacter causes HUS/TTP are poorly understood, but are thought to involve endothelial injury caused by endotoxins or immune complexes. In our case, the patient’s thrombocytopenia began to improve when diarrhea started to resolve after levofloxacin was initiated and repeat IVIG administered. It is unclear if her thrombocytopenia improved as part of the natural progression of the disease, or if it was in response to the antibiotic and/or IVIG treatment. Furthermore, the patient’s history of RA on methotrexate may have contributed to the severity of her illness and thrombocytopenia. 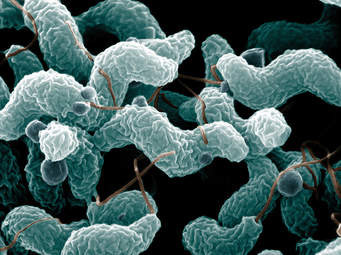 PROFOUND THROMBOCYTOPENIA ASSOCIATED WITH CAMPYLOBACTER JEJUNI INFECTION IN A WOMAN WITH RHEUMATOID ARTHRITIS.