Case Presentation: An 84 year old female with a past medical history significant for systemic lupus erythematous (SLE) presented to the emergency department with fatigue and dizziness. She had recently been admitted to the same hospital with acute kidney injury secondary to lupus nephritis. During that admission, she was started on high dose prednisone, a medication which was continued at discharge. Atovaquone was initially started for Pneumocystis jirovecii prophylaxis, but this was cost-prohibitive as an outpatient. Bactrim was avoided given her lupus nephritis and risk for worsening kidney function in the setting of SLE. Consequently, she was started on dapsone for prophylaxis prior to discharge.
Shortly after discharge, she began to contact her rheumatologist with reports of dizziness, headaches, and fatigue. After she complained of orthostatic symptoms, she was advised to present to the emergency department. On arrival to the emergency department, she was hypoxic to the 80s and had no improvement despite increasing levels of supplemental oxygen. Additionally, her hemoglobin had dropped nearly four grams from the last value. A peripheral smear was highly concerning for oxidative stress. Despite a recent test confirming normal levels of glucose-6-phosphate dehydrogenase (G6PD) , a methemoglobin level was checked and found to be somewhat elevated–12% with a Hemoglobin of 8.6–so methylene blue was administered, with a substantial improvement in oxygenation.

She was subsequently admitted for further monitoring. She did require a second dose of methylene blue for persistent symptomatic methemoglobinemia. Her clinical course was further complicated by a persistent hemolytic anemia also secondary to dapsone, requiring 2 units of packed red blood cells in total. The patient recovered and was discharged home on Bactrim prophylaxis.

Discussion: Dapsone is classically associated with both methemoglobinemia and hemolytic anemia: however, this typically occurs in one of three settings:
(1) chronic dapsone use
(2) acute overdose
(3) in those patients with G6PD deficiency.

Methemoglobinemia occurs when iron is oxidized to Fe3+ instead of the normal ferrous state. Under normal circumstances, NADH & NADPH reductases reduce Fe3+ to this normal ferrous state. In cases of methemoglobinemia, the reductases become overwhelmed and the higher proportion of Fe3+ results in a shift of the oxygen-hemoglobin dissociation curve to the left. Symptoms (headache, fatigue, tachycardia, weakness, and dizziness) appear at levels of 30 to 40%; death occurs at 70% or higher. The above case is highly unique as the patient presented with symptomatic methemoglobinemia at levels of just 12%. Furthermore, she did not have G6PD deficiency and she had just started prophylactic dapsone. She did not overdose on her medication either. In this case, her symptoms at a low methemoglobin level were likely secondary to a significant co-morbid hemolytic anemia.

This case illustrates how the presence of an acute anemia can influence the severity of methemoglobinemia symptoms. Interestingly, hemolytic anemia typically occurs five to nine days after the initial presentation in acute overdose. This patient had a co-morbid hemolytic anemia worsening her symptoms and resulting in a much earlier presentation at a much lower methemoglobin level.

Conclusions: This case illustrates the importance of a low threshold of suspicion for methemoglobinemia in any setting of dapsone use, especially if anemia is present. 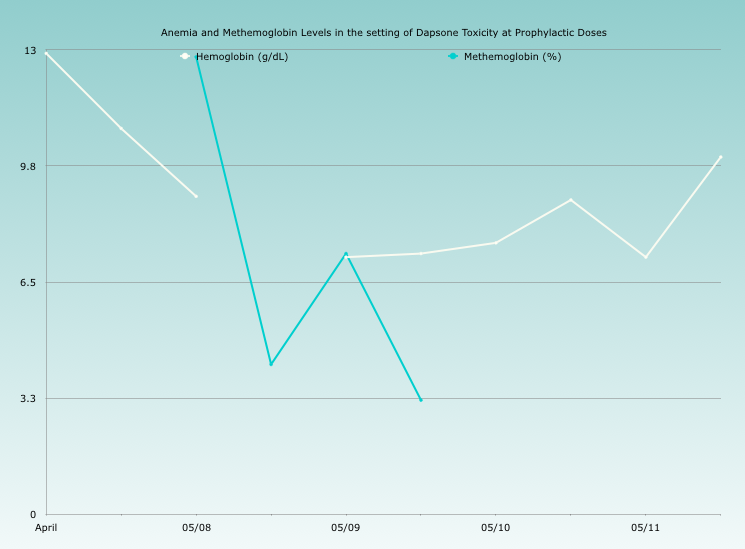