Case Presentation: A 62-year-old male with past medical history of type 2 diabetes mellitus, coronary and peripheral arterial disease, heart failure with reduced ejection fraction, history of peripheral arterial embolism, history of stroke, vascular dementia and hypertension who presented with sudden onset of shortness of breath associated with cough and chest pain for one day. The patient’s home medications were aspirin, furosemide, lisinopril, metoprolol, and rivaroxaban. Physical exam was remarkable for HR 123, RR 23 BP 147/83 and oxygen saturation of 98 on room air, decreased breath sounds on the left lower lung base and trace peripheral edema. Laboratory tests were significant for elevated blood glucose and BNP. CT angiogram of the chest showed pulmonary embolism (PE) in addition to left lower lobe consolidation and ground-glass opacity. Heparin infusion was initiated, but on hospital day 2, the patient further decompensated with worsening tachycardia and hypoxic respiratory failure. Point of care cardiac ultrasound was performed and revealed a thrombus in transit with a mobile 9 cm thrombus in the right atrium extending into the IVC, as well as severely reduced systolic function with an estimated EF of 10-15%. Due to high thromboembolic potential and morbidity/mortality of thrombus in transit, the patient was transferred to the MICU. After a long discussion between the family and multidisciplinary team (pulmonary, cardiology, medicine, interventional radiology and CT surgery), a decision for conservative management with anticoagulation only was made given his very high-risk surgical risk. Heparin infusion was continued, and the patient was bridged to warfarin during the hospital course.

Discussion: Our patient presented with right atrium thrombus in transit which most likely originated from distal deep venous thrombus based on its morphology. Thrombus in transit is almost always associated with PE(1) and without treatment carries a very high risk of mortality reaching >90%(1,2). Most of the deaths occur within 24 hours of hospitalization(1). Rapid initiation of treatment is crucial to slow the progression of the thrombus and prevents the evolution of PE. Treatment options remain challenging in the absence of randomized controlled trials due to the rarity of the condition. Small studies of pooled cases suggest the superiority of thrombolysis and surgical extraction over anticoagulation alone which in turn was superior to no treatment. In our case, we chose to treat the patient with anticoagulation given his high surgical risk and in alignment with family preferences. The preference for warfarin was made in our patient based on the failure of rivaroxaban.

Conclusions: This case report demonstrates the importance of point of care ultrasound in the initial evaluation of an ill patient. It can help the hospitalist in properly triaging the patient to the appropriate level of care, accurately diagnosing the disease process and rapid initiation of appropriate treatment. 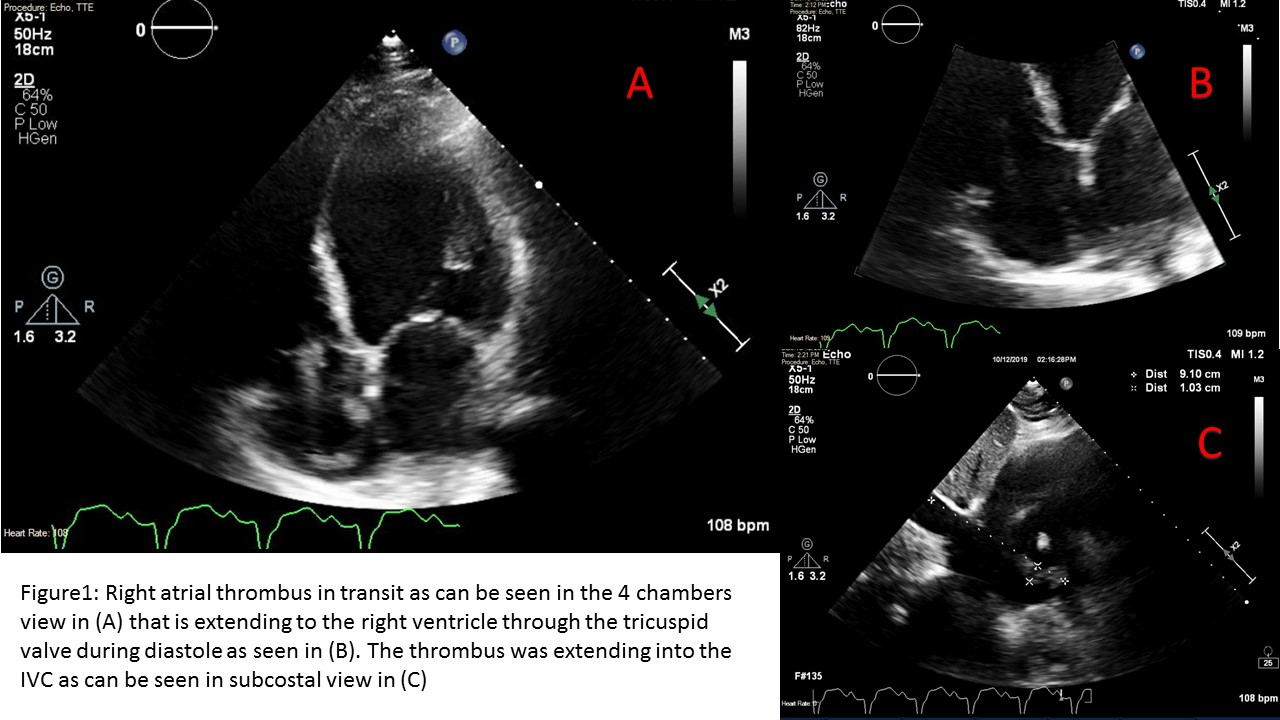