WHEN STEROIDS DON’T FIX THE SWELLING . . . A CASE OF DELAYED KAPOSI’S SARCOMA DIAGNOSIS

Case Presentation: A 21-year-old Hispanic male with recently diagnosed Acquired Immunodeficiency Syndrome (AIDS) was admitted to the hospital for evaluation of persistent periorbital edema, lower extremity edema, and worsening rash. He was diagnosed with AIDS about three months prior and had been on combination dolutegravir/lamivudine since diagnosis. His most recent CD4 count two weeks ago was 69 cells/uL. The patient stated the periorbital and lower extremities swelling began a few months ago with multiple corticosteroid regimens from various hospitals failing to help while the body-wide rash had been worsening over the same time period with no work-up to date. The patient reported no other medical conditions and was only on highly active antiretroviral therapy (HAART), as well as prophylactic antibiotic/antifungal medications. Physical exam findings included non-tender bilateral periorbital swelling with the right eye swollen shut. There were no signs of periorbital infection or discharge, and no pain with ocular movement. An integumentary exam was significant for numerous diffusely scattered palpable non-blanchable purpuric-appearing plaques and lesions located on the patient’s scalp, face, back, and upper/lower extremities of varying sizes from 0.5 to 3 cm. The lower extremities demonstrated bilateral non-pitting edema. CT imaging of head and maxillofacial regions reported diffuse infiltrative processes affecting scalp and periorbital soft tissues, while a CT chest reported mildly prominent lymph nodes throughout bilateral axilla, lower neck, and mediastinal/hilar regions. Admission vitals were stable and laboratory findings revealed mild leukocytosis with send out labs eventually returning with CD4 of 154 cells/uL and HIV viral load of 522 copies/ml. With suspicion for disseminated AIDS-related Kaposi’s Sarcoma (KS), a skin biopsy was performed which confirmed the diagnosis. HIV-related lymphoma was ruled out with axillary lymph node biopsy, which again confirmed Kaposi’s sarcoma and positive Human Herpes Virus 8 (HHV-8) staining. The patient established care with oncology during his hospitalization and was discharged with the plan to start systemic chemotherapy with pegylated liposomal doxorubicin.

Discussion: Kaposi’s Sarcoma is a vascular tumor with four forms: AIDS-related, classic, endemic, and organ transplant-related. While all forms are associated with HHV-8 infection, the prevalence of KS in the AIDS-related subtype is increased with lower CD4 counts, especially below 200 cells/uL. Clinical findings of KS commonly include purpuric-appearing cutaneous lesions of varying size and colors that are typically seen on the face and extremities. Less commonly observed is the presence of significant edema, which is demonstrated in this case. Oftentimes, the swelling will appear out of proportion in relation to the extent of the disease burden, which may be related to cytokine involvement and/or vascular obstruction. Staging and treatment of KS is dependent on the spread and progression of the disease, ranging from simply continuing HAART therapy to systemic chemotherapy.

Conclusions: In order to promptly confirm the diagnosis and initiate specialist care for appropriate treatment, the hospital provider must be able to judiciously recognize both the common pathognomonic cutaneous lesions seen in Kaposi’s Sarcoma and the less common manifestations, such as significant facial, genital, and extremity swelling in the HIV/AIDS patient. 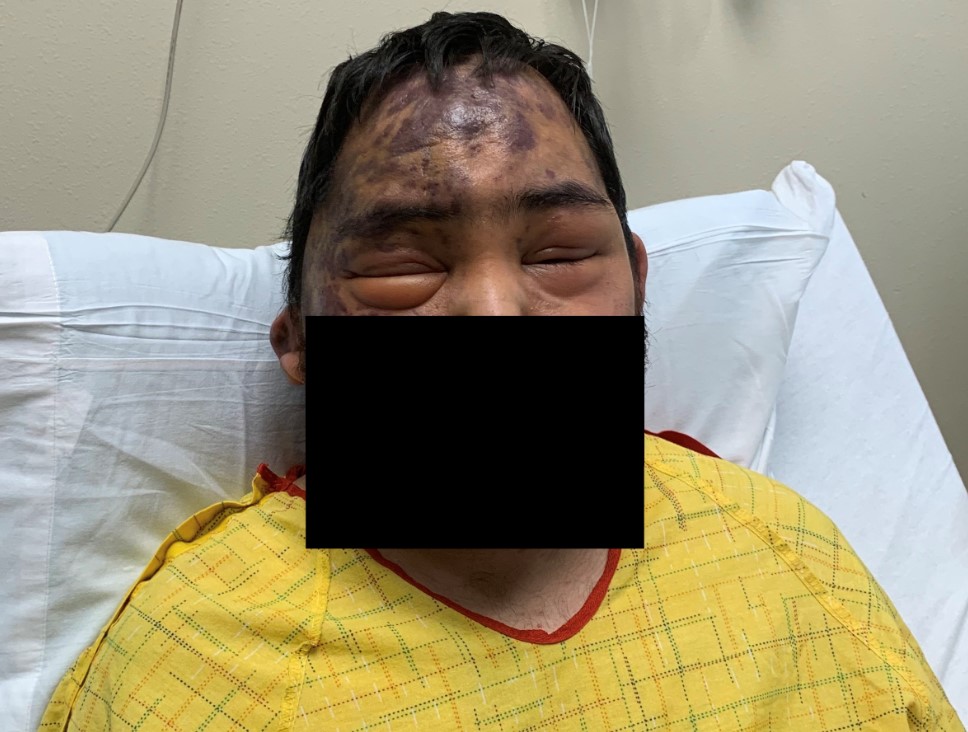 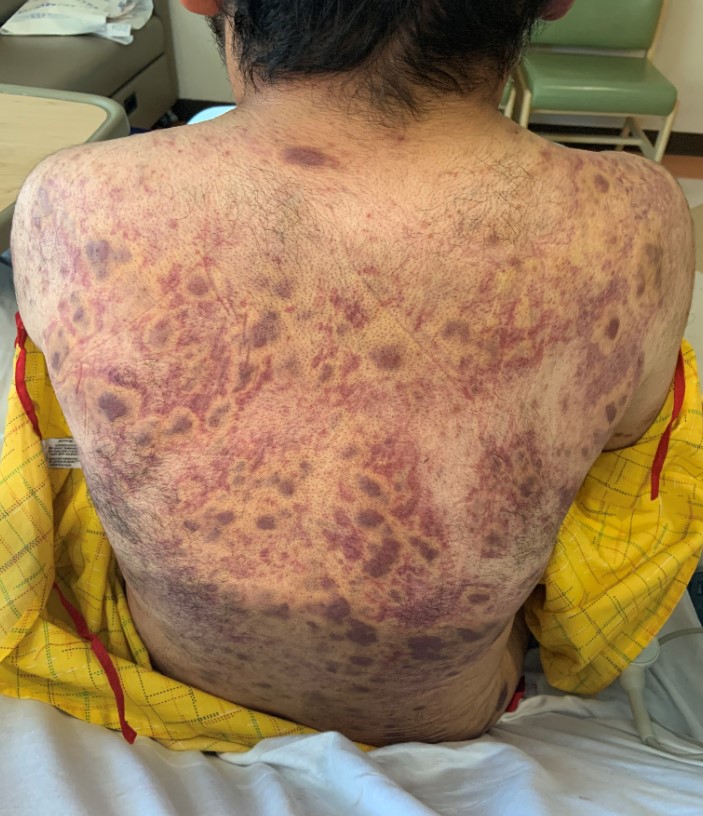 WHEN STEROIDS DON’T FIX THE SWELLING . . . A CASE OF DELAYED KAPOSI’S SARCOMA DIAGNOSIS.