Case Presentation: A 23-year-old male with past medical history of anxiety disorder presented with nausea and multiple episodes of vomiting for 2 days. He also had generalized abdominal pain that was cramp-like in nature. There was no abdominal distention, however the patient reported constipation. He passed flatus during this episode. Noteworthy was the patient’s 10 lbs weight loss over the previous month. He denied purging or induced vomiting. Over the previous year the patient had repeated episodes of early satiety and post-prandial vomiting that would resolve after abstaining from oral intake for one day. Examination revealed a very thin, dehydrated man who was tachycardic at 108/min. His vitals were otherwise within normal limits. Blood chemistries and hematologic studies were normal. CT scan of the abdomen with IV contrast showed distention of the stomach and duodenum. Compression of the 3rd segment of duodenum was also noted. The aorto-mesenteric angle was reduced to 12 degrees. There was also compression of the left renal vein at this point (figure 1).
The patient was initially volume resuscitated then treated with bowel rest and total parenteral nutrition (TPN). Conservative management failed, and he ultimately underwent duodenojejunostomy. His obstruction was relieved, and he was discharged on postoperative day 7.

Discussion: Wilkie’s and Nutcracker syndromes arise from compression of the structures which pass between the superior mesenteric artery (SMA) and the aorta. The eponymous Wilkie’s syndrome, also known as SMA syndrome, involves compression of the 2nd or 3rd segment of the duodenum. The resulting duodenal obstruction may occur acutely or, as in our patient, present as chronic repeated episodes of partial small bowel obstruction. Patients may present with early satiety, post-prandial vomiting and abdominal distention. The Nutcracker syndrome results in compression of renal vein. Renal vein hypertension follows and may present as hematuria. A rapid loss of mesenteric adipose between the SMA and aorta is the basis of both entities. Inferior branching of these vessels and a short ligament of Treitz is also culprit. Patients with psychiatric disorders resulting in decreased intake as well as high catabolic states are particularly susceptible. CT imaging showing reduction in the aorto-mesenteric angle below 22 degrees is diagnostic. Treatment is initially supportive with bowel rest, hydration, correction of electrolyte imbalances and nutritional support with TPN. Duodenojejunostomy is reserved when conservative measures fail.

Conclusions: Wilkie’s syndrome is a rare entity which may presents as partial small bowel obstruction. A history of repeated episodes of obstruction should raise the clinician’s suspicion. Nutcracker syndrome is a closely related condition. 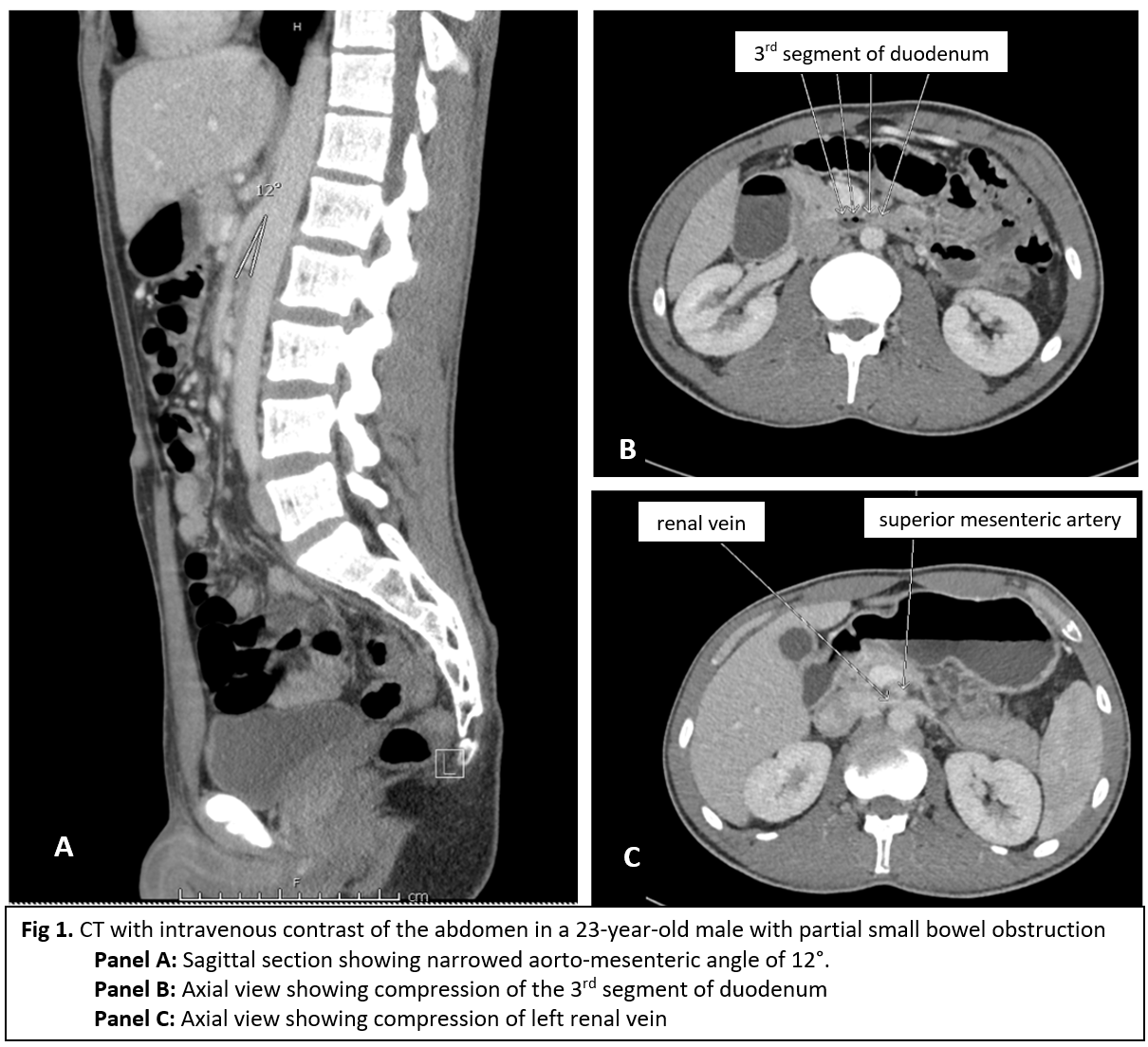