A CASE OF DISSEMINATED HISTOPLASMOSIS COMPLICATED BY CONCOMINANT CMV INFECTION

Case Presentation: A 48-year-old female with AIDS, HFrEF, asthma, and hypertension presented with weight loss, fatigue, chills, abdominal pain, vomiting, left neck swelling, and purulent mouth drainage over the last 2-3 weeks. She was febrile to 102.9 F, hypotensive (85/64), tachycardic, tachypneic, and had firm, mobile, 2-3 cm cervical lymph nodes and enlarged tonsils. Labs were significant for pancytopenia (WBC 2.97, Hgb 6.4, Plt 12) and CD4 15. CT imaging showed oropharyngeal soft tissue density (1.3×1.8×1.5cm), bilateral lung micronodules, splenomegaly, retroperitoneal lymphadenopathy, and mucosal thickening of the proximal colon. Due to concern for sepsis, the patient was placed on broad spectrum antibiotics. Due to pancytopenia, bone marrow biopsy was obtained and revealed numerous budding yeast forms on GMS stain, consistent with Histoplasma capsulatum. Further, her blood smear showed monocytes with intracytoplasmic yeasts, urine tested positive for Histoplasma antigen, and Fungitell Assay was elevated. She was started on amphotericin. CMV PCR blood was elevated at 2,300 IU/mL. She was started on ganciclovir. EGD and colonoscopy were performed to explore GI symptoms and confirm CMV diagnosis. EGD was significant for linear esophageal erosions, diffuse inflammation characterized by erythema and “snakeskin” appearance throughout the stomach, and four 10-15mm duodenal polyps (one appeared to be flat and ulcerated, the others were pedunculated and bleeding). Colonoscopy was significant for multiple flat, sessile polyps in the cecum and ascending and transverse colon, with the largest measuring 2cm. A solitary ulcerated mass was also found at the hepatic flexure. Biopsies of the duodenum and colon were notable for CMV inclusions within the cells of the lamina propria and numerous yeast forms consistent with Histoplasma. Biopsies of the esophageal lesion revealed CMV inclusions, consistent with CMV esophagitis. Her symptoms resolved after one week of treatment, and she was discharged home on itraconazole and valganciclovir.

Discussion: Both Histoplasma and CMV are common opportunistic infections in patients with AIDS. As seen here, disseminated histoplasmosis can present with subacute constitutional symptoms, pancytopenia, and lymphadenopathy. This relatively nonspecific constellation of symptoms overlaps with tuberculosis and hematologic malignancies, creating diagnostic uncertainty. Indeed, lymphoma was initially the leading differential diagnosis in this case. This patient’s case was further complicated by co-infection of her GI tract by Histoplasma and CMV, a rare occurrence that presented as emesis, abdominal pain, and mucosal thickening of the colon on CT. Although previous case reports have described Histoplasma and CMV co-infection in the ileum and colon, this case is the first reported co-infection of the duodenum (1). While this patient had already been diagnosed with disseminated histoplasmosis and CMV viremia prior to endoscopy, without this prior knowledge her GI masses could have been mistaken for neoplastic processes. Determining the etiology of the masses was critical to further management.

IMAGE 1: Images from EGD and colonoscopy showing polyps in duodenum and colon 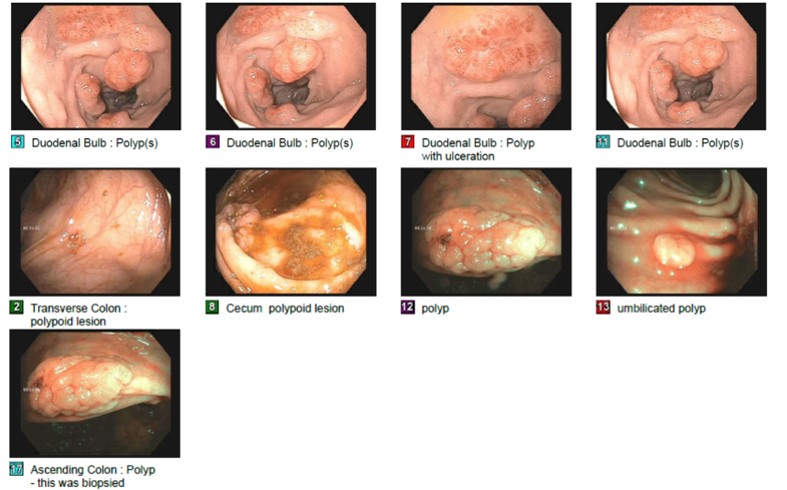 A CASE OF DISSEMINATED HISTOPLASMOSIS COMPLICATED BY CONCOMINANT CMV INFECTION.