CEREBRAL PHAEOHYPHOMYCOSIS IN AN IMMUNOCOMPROMISED PATIENT

Case Presentation: A 66 year-old woman with a past medical history of atrial fibrillation and chronic kidney disease secondary to lupus nephritis status post direct donor renal transplant 10 years ago presented with blurry vision in her right eye and aphasia. Patient was on mycophenolate and tacrolimus for immunosuppressive therapy. CT head showed a mass at the left temporoparietal junction with large amount of surrounding vasogenic edema. MRI brain showed a 2.8 x 1.2 x 1.6 cm lesion with an immediately adjacent daughter lesion. Serum CMV, histoplasma, toxoplasma, crytopcoccus, coccidioides and blastomycosis testing was negative. Brain biopsy was performed and the mass was found to be an abscess with aspirate cultures growing Cladophialophora bantiana. Patient was started on IV voriconazole, however, given the risk of large neurological deficits, no further neurosurgical intervention was taken. Unfortunately, our patient continued to deteriorate clinically and family members decided to pursue comfort measures.

Discussion: Central nervous system infections due to dematiaceous fungi (referred to as cerebral phaeohyphomycosis) are thought to be secondary to extension from adjacent paranasal sinuses, trauma or hematogenous spread. These infections are caused by a group of fungi that are now collectively known as Cladophialophora bantiana. Presenting symptoms of CNS infections include focal neurological symptoms or seizures with fevers and headaches being less common in affected individuals. Neuroimaging studies will typically reveal a single enhancing hypodense lesion in the frontal or parietal lobe. Diagnosis is made by aspiration or resection of the abscess with microscopic findings including branching, septate hyphae that stain brown using hematoxylin and eosin. The treatment of cerebral phaeohyphomycosis requires both resection of the abscess and a prolonged course of antifungal therapy.
Here, we present a case of an elderly immunocompromised female who presented with focal neurological deficits and was eventually diagnosed with cerebral phaeohyphomycosis. Treatment was delayed in our patient as her mass was initially thought to be a neoplasm over abscess based on imaging. Biopsy was also delayed as patient was on anticoagulation for her history of atrial fibrillation. Furthermore, given her high risk of neurological complications, she did not have any further intervention for source control.

Conclusions: Fungal infections are important differentials to consider in transplant recipients on immunosuppressive agents as they are associated with high morbidity and mortality rates. In particular, cerebral phaeohyphomycosis carries a mortality rate of 50%, thus early diagnosis as well as aggressive treatment is key for survival. 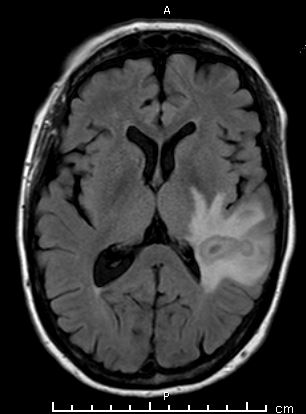 CEREBRAL PHAEOHYPHOMYCOSIS IN AN IMMUNOCOMPROMISED PATIENT.