CHOREA IN CANCER: AN UNLIKELY CULPRIT

Case Presentation: 52-year-old female with history of Stage IIIA triple negative right sided breast cancer, seizure disorder, and s/p lumpectomy presents with ataxia, confusion, and dyskinesia over the past 2 weeks. The patient is chronically on phenytoin, ondansetron, paroxetine, and potassium supplements. She has been on phenytoin since her last seizure three years ago. She has been on adjuvant capecitabine for the past 2 months. The patient reported a 2 week history of progressively worsening ataxia, difficulty with short term memory, headaches, photophobia, involuntary movements and changes in vision. During the past 2 weeks, the patient visited another ER for similar complaints. All her labs including a phenytoin level were normal and she was discharged on clonazepam. Her symptoms improved for a couple of days but then started to worsen. She was evaluated by a neurologist for metastatic disease. She had a brain MRI which was negative. She presented to our hospital the next day. Her vitals were normal and her neurological examination only showed lack of coordination of upper and lower limbs. Her CBC and CMP were all within normal limits. She underwent an EEG and a lumbar puncture both which were negative for infection, seizure, and metastasis. A phenytoin level was ordered and resulted in level of 70.6 ug/mL (Upper Normal is 20). She was admitted for phenytoin toxicity. Over the course of ten days, the patient’s symptoms improved and she was transitioned to lacosamide for her seizure disorder.

Discussion: Phenytoin is an anticonvulsant used for prevention of tonic-clonic and partial seizures. Phenytoin functions by causing voltage dependent block of voltage gated sodium channels. Some common (>10%) side effects of phenytoin toxicity include hypotension, rash, nausea, nystagmus, dizziness, somnolence, and ataxia. Rare side effects (<1%) include confusion, psychosis, photophobia, myopathy, and dyskinesia. Metabolism of phenytoin is by the hepatic cytochrome P450 enzymes, CYP2C9 and CYP2C19. The metabolism of phenytoin is saturable, making it highly susceptible to drug interactions. Capecitabine is an orally administered fluoropyrimidine carbamate prodrug that is converted into the active 5-Fluorouracil, indicated in treatment of metastatic colon and breast cancer. Formal studies of the interaction between phenytoin and capecitabine have not been directly studied. It is hypothesized there might be inhibition of CYP2C9 isoenzyme by capecitabine, decreasing the metabolism of phenytoin. Several recently published case studies imply a risk of phenytoin toxicity when taken in conjunction with capecitabine or other fluoropyrimidines.

Conclusions: Recent theoretical pharmacokinetic model shows interaction between phenytoin and capecitabine through CYP2C9. It is important for hospitalists to monitor the levels of phenytoin frequently and closely monitor the side effects when a patient is receiving capecitabine or other 5-FU prodrugs. Vigilance for rare side effects such as confusion, psychosis, photophobia, myopathy, and dyskinesia should be considered when the patient is taking Phenytoin and Capecitabine. This case demonstrates either close monitoring or switching of anticonvulsant therapy should be considered in this patient population.

IMAGE 1: Pharmacokinetics of 5FU and Phenytoin 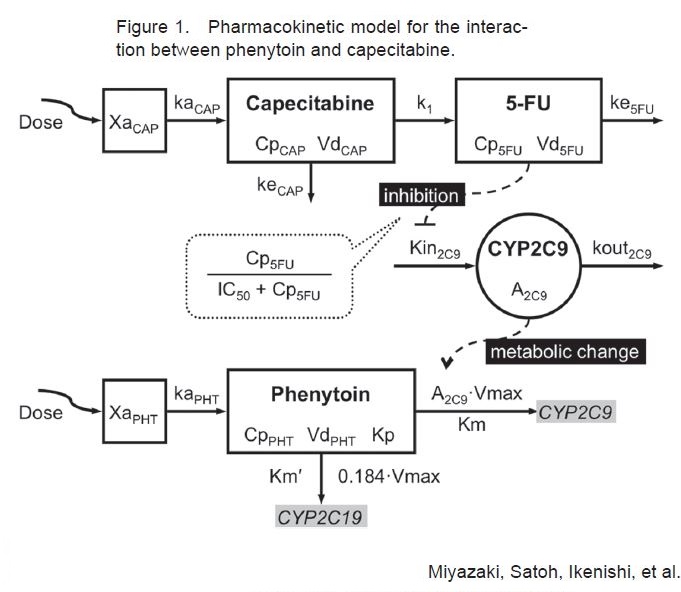 CHOREA IN CANCER: AN UNLIKELY CULPRIT.