Methods: Data from the National Inpatient Sample (NIS) which is part of the databases developed for the Healthcare Cost and Utilization project (HCUP) was used for our analysis. We identified patients who were 18 years and older with intrahepatic or extrahepatic biliary duct carcinoma who underwent a procedure (biliary stent, resection, bypass, pancreatic resection, liver resection, and transplantation) during a hospitalization. Our primary aim was to describe outcomes in terms of inpatient mortality, length of stay and hospitalization cost based on tumor location. We used multivariable logistic regression to calculate adjusted odd ratios and mean differences for each cohort. We controlled for patient-level characteristics (age, race, sex, comorbidity burden) and hospital level characteristics (hospital region, size and teaching status) using multivariable analysis. We also controlled for insurance type, and procedure received during hospitalization.

Results: We identified a total of 18,840 admissions in 2014 with a discharge diagnosis of cholangiocarcinoma (intrahepatic or extrahepatic). Of these, 13,930 (73.1%) were intra hepatic while 4,930 (26.1%) were extrahepatic. Inpatient mortality amongst patients with extrahepatic bile duct carcinoma was 5.5 % while that for intrahepatic bile duct carcinoma was 7.69%. After controlling for confounders, including treatment received during hospitalization, patients with extra hepatic disease were 30 % less likely (Adjusted Odds Ratio 0.70, 95 % CI 0.512-0.966) to die during hospitalization compared to patients admitted for intrahepatic bile duct carcinoma. Length of stay was similar between the two groups (Adjusted Mean Difference -0.10, 95 % CI -0.64 -0.44) as was the average cost of hospitalization (Adjusted Mean Difference. -4126, 95% CI -1.0986.5 – 2733.16).

Conclusions: The location of biliary duct carcinoma predicts inpatient mortality, even after controlling for treatment received. Intrahepatic cholangiocarcinoma has a worse prognosis than extra hepatic tumors, although length of stay and the average cost of hospitalization are similar across the two cohorts. The two carcinomas have different histology, molecular characteristics, and associated genetic abnormalities. Intrahepatic cholangiocarcinoma is more likely to be associated with cirrhosis due to underlying viral hepatitis or non-alcoholic fatty liver disease. It is unclear if these pathological characteristics or underlying chronic inflammation influence outcomes. We recommend prospective studies to better understand reasons for variation in hospitalization mortality seen in patients with intrahepatic cholangiocarcinoma 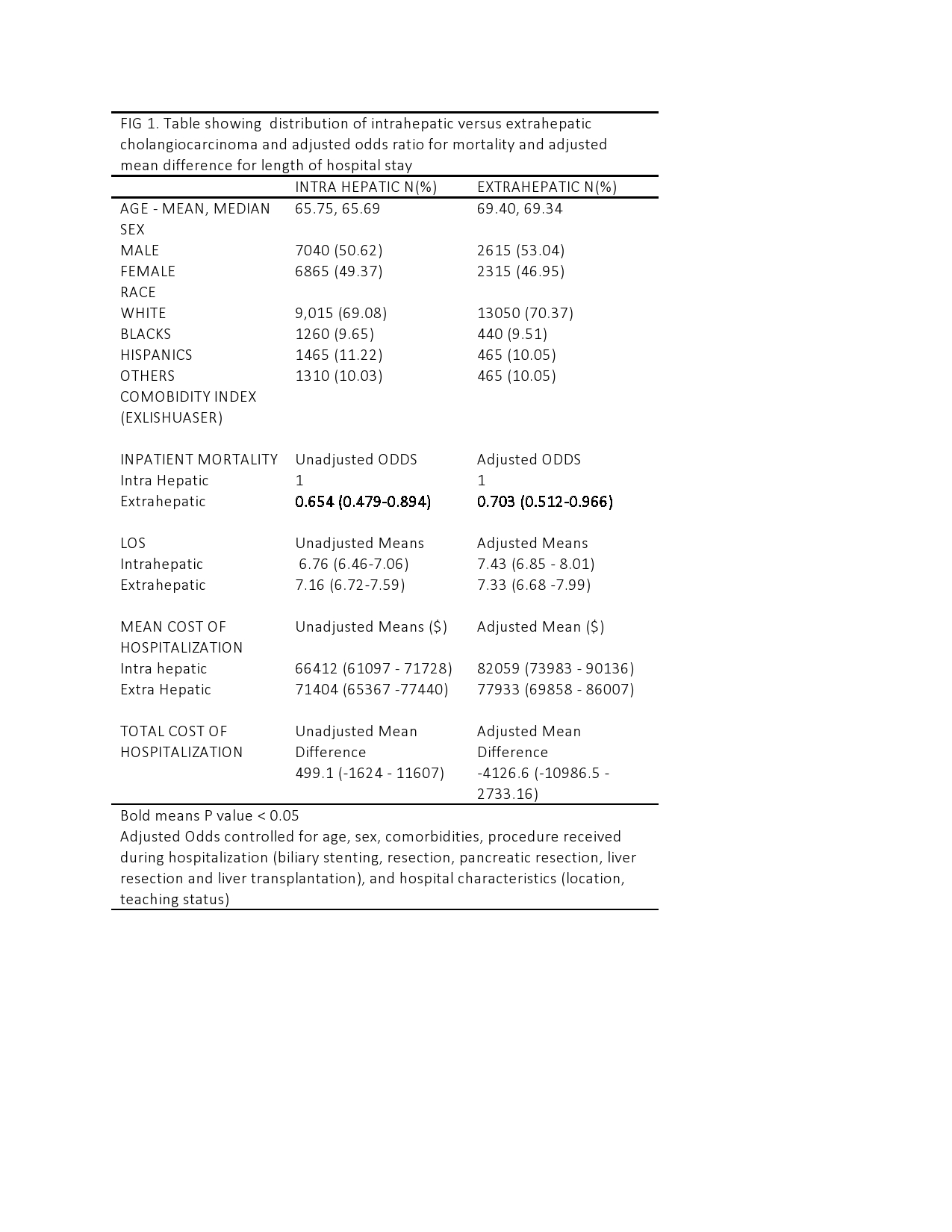