Case Presentation: A 52-year-old male presented for an evaluation of hematuria. The complete blood count, basic metabolic panel and liver function tests were within normal limits. A CT abdomen and pelvis showed an incidental, 1.5 cm lesion in the right hepatic lobe. Following fine needle aspiration biopsy of the lesion, the tissue demonstrated a slightly irregular hepatic duct proliferation, for which a differential diagnosis of bile duct adenoma (BDA) and well-differentiated cholangiocarcinoma was considered. The serum levels of tumor markers including alpha-fetoprotein, carbohydrate antigen 19-9, and carcinoembryonic antigen were normal and hepatitis serologies were negative. An MRI was obtained to better ascertain the lesion, which demonstrated a 1.1 x 1.1cm lesion within the right hepatic lobe, segment 6 (Figure 1). The case was discussed on tumor board and the decision was made to pursue a hepatic resection of segment 6-7. On gross examination, the specimen was serially sectioned, revealing an ovoid, well-circumscribed, white-tan, firm lesion measuring 1.4cm in greatest dimension, and located 0.5cm from the hepatic capsule. Microscopically, there was a well-circumscribed lesion composed of small biliary-type glands in tubular and branching trabecular patterns (Figure 2). There were a mild nuclear enlargement and inconspicuous mitotic activity. The lesion was well-delineated and the interphase with hepatocytes was regular without infiltrative growth. Immunohistochemically, CD56 was focally positive in the tumor. Because of the size of the tumor as well as subtle nuclear atypia, the most appropriate diagnosis was atypical bile duct adenoma.

Discussion: Intrahepatic bile duct adenoma is a rare tumor arising from the epithelial cells of the bile ducts. BDA has been usually found incidentally by intra-abdominal surgery and autopsy. BDA is clinically significant because of its benign prognosis but also its difficulty differentiating from malignant neoplasms of the liver by imaging studies. The main characteristics of BDA are as follows: the lesion is small-sized, with a diameter ranges between 1 to 20mm; the lesion is always detected under the hepatic capsule, with clear borders but without capsule; the majority of the proliferated bile ducts are observed in the lesion, accompanied by plenty of chronic inflammatory cell infiltration; immunohistochemical stain for CK7, CK19, and CD56 are positive, whereas Ki67 and p53 are negative. Gütgemann et al. suggested that CD56 expression can aid the differential diagnosis of cholangiocarcinomas and benign lesions such as BDA. Since our case showed positive CD56 stain along with other aforementioned features, the suggested diagnosis was BDA.

Conclusions: In summary, we presented a case of BDA which was incidentally found and surgically resected. As BDA is a rare, indolent and benign tumor, there is a paucity of studies. However, since there are no definite imaging characteristics or tumor markers that allow a preoperative diagnosis, surgical resection followed by microscopic and immunohistochemical findings is crucial for a diagnosis.

IMAGE 1: MRI Abdomen with contrast: A 1.1cm ring-enhancing liver lesion was present posteriorly within the right lobe, segment 6. There was no evidence of contrast washout. 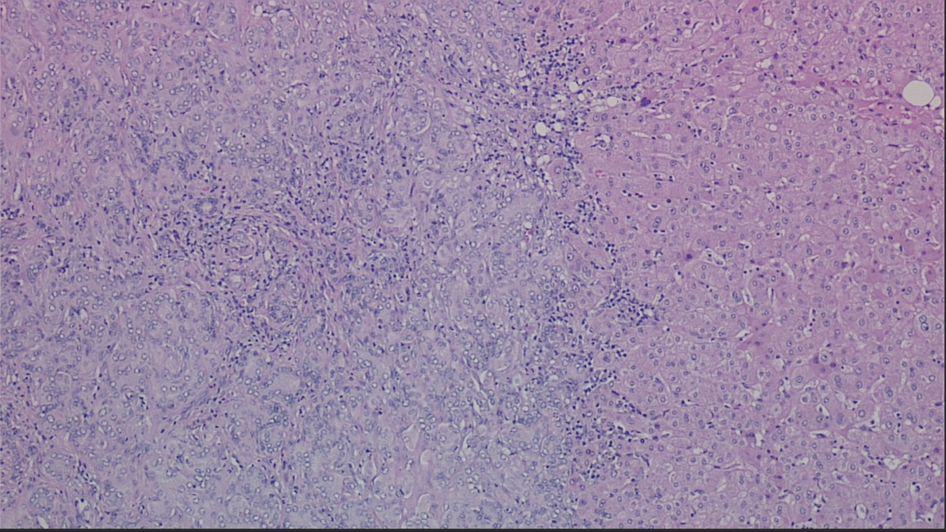