Case Presentation: 29 y.o. female with a history of autoimmune hepatitis presented with worsening lower extremities ulceration. The onset of rash was four months ago during which she visited dermatology clinic. Vitals signs were within normal limits, physical examination was consistent with large deep necrotic painful ulceration with violaceous erythema, retiform purpura on bilateral lower extremities. There were scattered hyper-pigmented lichenified papules and nodules, multiple smaller ulceration on elbows, breast, back, buttocks and oral mucosa. Necrotic ulcers were also noted on the ears, digits and nose. Labs were significant for elevation of liver enzymes and alkaline phosphate, elevated bilirubin, mild leukopenia, chronic microcytic anemia. Urine drug screen was positive for cocaine. Skin lesion biopsy from 3 months ago demonstrated epidermal ulceration, dermal fibrosis and mixed inflammatory infiltrate, tissue culture then was positive for pan-sensitive staphylococcus aureus, for which she was treated with doxycycline for two weeks without improvement. Other labs were significant for positive smooth muscle antibodies, P-ANCA staining with titer > 1:640, elevated dsDNA, elevated anti-histone antibodies, SPEP with elevated polyclonal gammopathy but without MGUS, negative cyclic citrillunated peptide antibodies, negative RPR, negative viral hepatitis serology, and negative HIV. Colonoscopy with biopsy was not consistent with findings of inflammatory bowel disease. Patient reported noticing the rash after use of cocaine and worsening with continued use. She was counseled to abstain from cocaine use. She was followed up outpatient, when improvement of the rash was seen after discontinuing cocaine.

Discussion: Levamisole is a synthetic imidazothiazole derivative used as a cocaine-cutting agent which acts as an immune-modulator and immune-enhancer by increasing macrophage chemotaxis and T-cell lymphocyte function. It has been found in 69% of the cocaine seized in the United States and can result in a dramatic vasculopathy and vasculitis of small and medium size blood vessels. The syndrome is accompanied by a wide array of autoantibodies including high titers of ANCAs, antiphospholipid antibodies and antibodies to dsDNA. Necrosis of the earlobe is a common and distinctive feature. Levimasole can be detected by gas chromatography-mass spectrometry but its half-life is 5.6 hours making the detection challenging, however this is not necessary for diagnosis. Diagnosis can be made in the context of other clinical, pathologic and laboratory findings. Our case is unique because our patient did not exhibit the typical histological features as seen in Levamisole-induced vasculitis (LIV) making the diagnosis challenging, however rare cases can present with histology negative LIV. Treatment is unclear and consists of cessation of cocaine. Use of steroid has not been shown to accelerate or improve healing and is associated with bacterial superinfection of the wounds, making it crucial to diagnose this entity early to avoid complications.

Conclusions: LIV can have cutaneous, rheumatologic and renal manifestation. The most extensive case of levamisole-induced vasculitis was 52% TBSA; in which patient required multiple skin grafts and eventually an above-the-knee amputation. It is pertinent to be aware of the presentation and ability to diagnose this challenging entity to facilitate correct management and early cocaine abstinence. 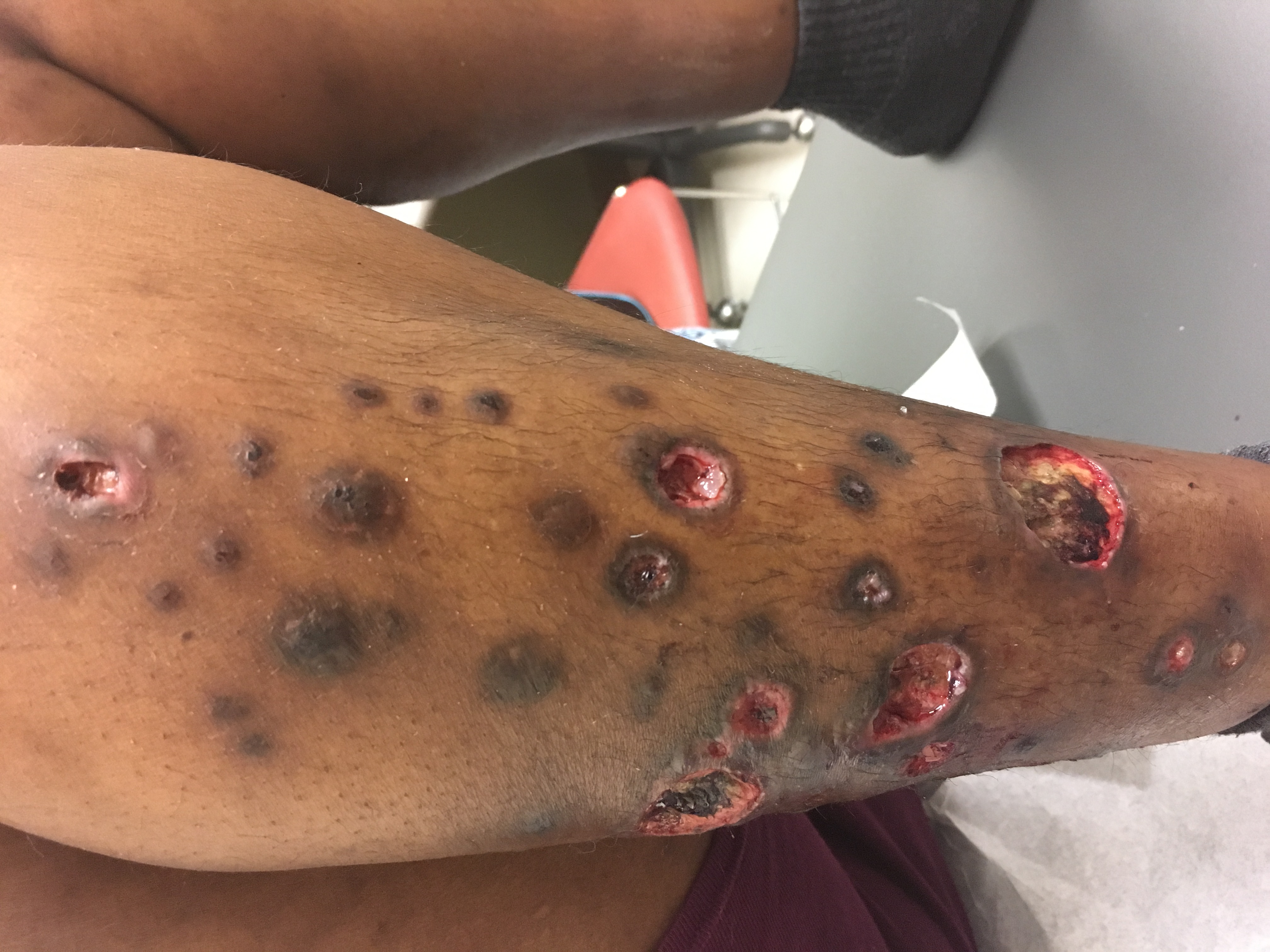 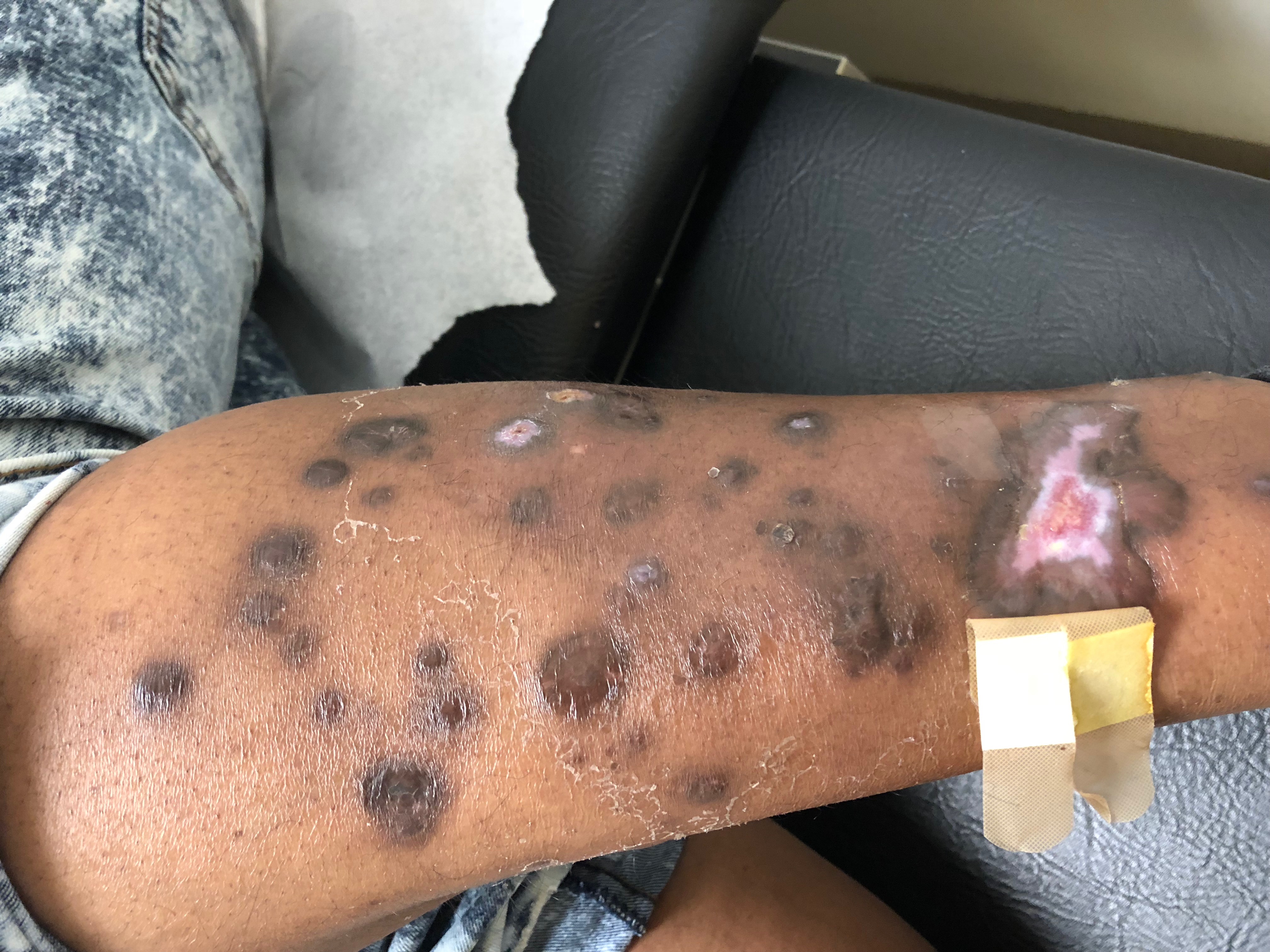