Background: How to combat the corrosive effects of burnout during residency training remains a persistent question, but a supportive working environment has shown to be a protective factor.

METHODS: Through an electronic form, the GTP allowed residents to nominate a co-resident for any behavior they saw as going “above and beyond.” Every month, golden ticket recipients were offered a token prize, and the reasons for the nominations were posted near the residency lounge.

As part of an IRB-exempt study, two reviewers independently analyzed each ticket using modified grounded theory to code for common themes; each ticket was coded with one or two themes, and consensus was reached by the reviewers. Post-intervention, an anonymous Likert survey was distributed to all residents to assess their attitudes about the GTP.

RESULTS: Residents awarded 56 tickets (representing 63 themes) during the 10-month pilot period (October 2013-July 2014) that cited five major themes: Positive Attitude, Teamwork, Patient Care, Resident-Resident Support, and Strong Supervisor Skills. Across all classes, the most recognized theme was Teamwork, noted in 44% of awarded ticket traits. PGY2 and PGY3s gave golden tickets proportionately more for Patient Care than PGY1s. According to the post-intervention survey (response rate: 55%), those who participated in the GTP agreed that because of the GTP, they were “more aware of acts of kindness in the residency program.” 76% of the survey respondents indicated they wanted the program to continue.

Conclusions: Findings from this pilot project suggest that the GTP is a valued wellness intervention. The GTP characterized appreciated peer traits that can be the basis for further interventions to create a supportive working environment. Feasible and relatively inexpensive to implement, the GTP offers a needed venue for residents to recognize teamwork and other positive attributes of their co-residents. 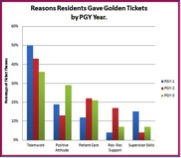