Background: Tissue pathology plays an integral role in the diagnosis of various conditions, especially malignancy. Traditionally biopsy procedures, including core needle biopsy (CNB), have been performed by specialists under imaging guidance. They are traditionally done in special procedure rooms/suites–which come with an added cost of nursing staff, transportation and equipment. Meanwhile hospitalists are increasingly becoming familiar and competent with ultrasound applications and bedside procedures. We aim here to review our pilot experience in a large urban safety-net tertiary center, including review of safety, cost savings and lessons for future improvement in performing bedside ultrasound-guided biopsies.

Methods: Our medical procedure service (MPS) is comprised of 4 attending hospitalists and 1 nurse practitioner trained in ultrasound-guided procedures. Since its inception in 2006, an average of 2200 procedures are performed yearly. From 2015 to 2017, we have received 67 requests for bedside CNB. Based upon patient factors, equipment, lesion size and provider logistics–54 requests were fulfilled. All procedures were done with standardized equipment and technique, including real-time ultrasound guidance. Eligibility criteria for the consideration of a biopsy was a palpable or visible lesion. Reasons not to perform the procedure included: inadequate size, safety concerns, lack of equipment or patient refusal.

Results: An average of 3.3 core samples were collected per procedure. Average depth of lesions was 3.4cm, with a range of 1.5 to 10cm. 74% (44/54) of the biopsies were performed on the same day. The remaining 10 were done the next working day. The pathology submitted from all biopsies yielded an initial definitive diagnosis in all but 4 cases. All 4 cases (4/54, 7%), constituting 3 patients total, required a follow-up excisional biopsy which confirmed the original diagnosis of reactive adenopathy. This correlated to an actionable diagnostic yield of 93%, similar to that reported in the literature. Considering the final excisional biopsy results of these 4 procedures that did not reveal a definitive initial diagnosis, the retrospective accuracy of bedside biopsies was 100%. 80% of cases returned a diagnosis of malignancy, with the remaining 20% yielding a variety of diagnoses including actinomycosis, tubcerulosis, sarcoidosis, reactive adenopathy or non-malignant tumor.

Two minor complications occurred. One patient, on dual-antiplatelet therapy with aspirin and clopidogrel,, had mild bleeding (~20ml) from the supraclavicular biopsy puncture site which resolved with direct pressure. This accounted for 1.8% of the cohort, similar to described rates of hemorrhage in the literature. One patient also developed transient neuropathic pain over the lateral left arm after the final needle pass caused transient irritation of a brachial plexus nerve root.

Conclusions: Bedside CNB by hospitalists is a safe and effective alternative to traditional open biopsy procedures. As evidenced by the series described, the procedure is teachable and learnable as part of faculty training. With the growing use and interest in bedside ultrasound and procedures, an equally growing interest and use of CNB can be justified to improve healthcare efficiency and cost. A definitive cost assessment is needed along with a standardized training model. In conclusion, we feel moving these procedures to the bedside by trained hospitalists would improve overall delivery of care to patients. 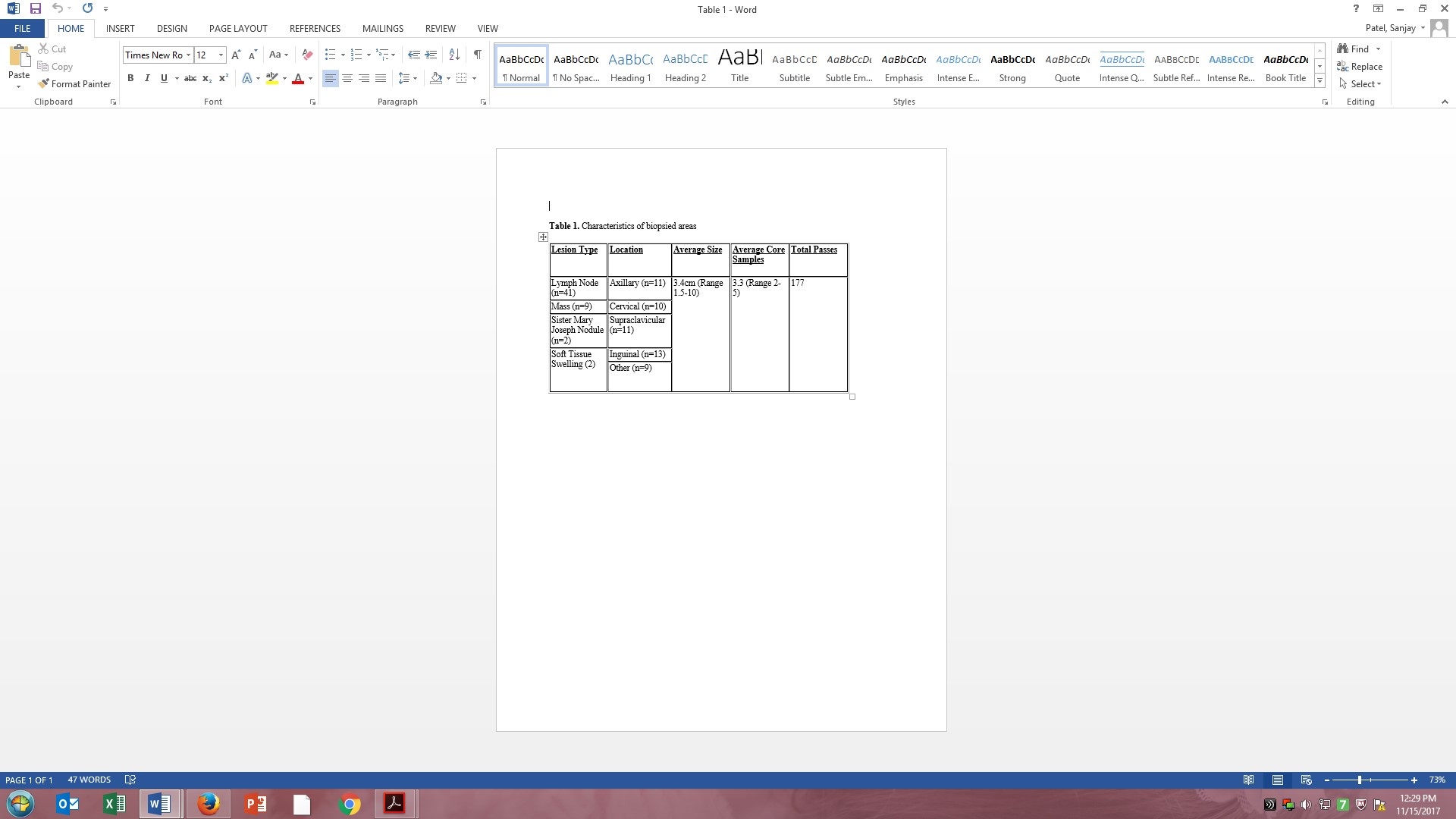 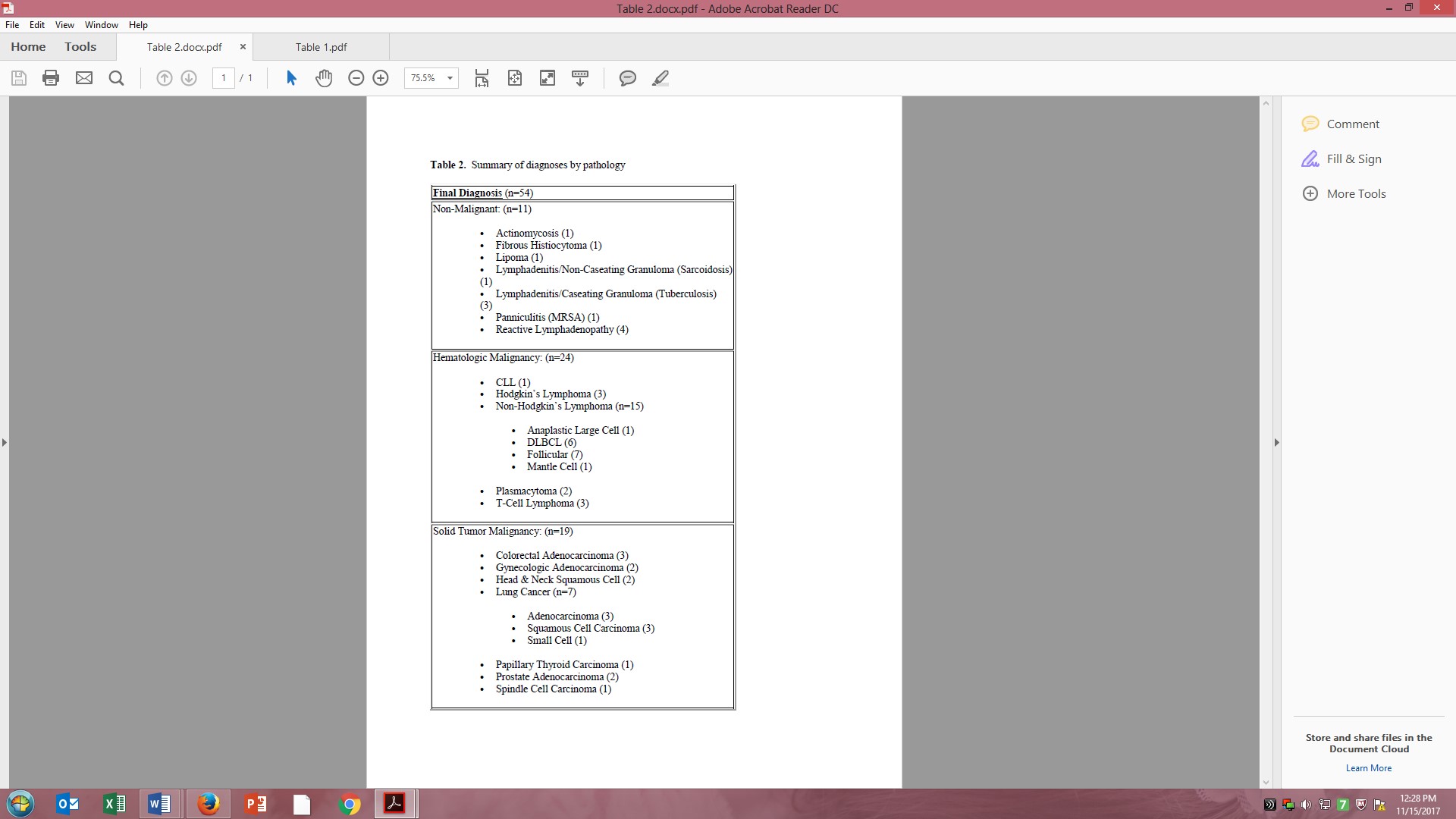