WHEN KIDNEYS EXPLODE: A CASE OF XANTHOGRANULOMATOUS PYELONEPHRITIS

Case Presentation: A 69 year-old man with a history of urothelial carcinoma of the bladder status-post cystoprostatectomy with ileal conduit presented with fatigue, tachycardia, night sweats, and foul-smelling urine. At an outside hospital, he had recently been diagnosed with a new 11cm right renal mass with apparent diaphragmatic invasion. On exam, he was a pale, chronically-ill appearing man with rigors and but no abdominal tenderness; heart rate was 120 but other vital signs were normal. His labs were notable for a white blood cell count of 10,300/ml3 with neutrophilic predominance and hemoglobin of 8.7 g/dL, as well as a serum creatinine of 1.27 mg/dL. The patient was found to have blood cultures positive for Escherichia coli. Urine cultures grew E. coli, Enterococcus spp, and Providencia rettgeri, and he was started on antibiotics for presumed bacterial superinfection of a renal malignancy. Percutaneous nephrostomy tube placement resulted in the drainage of frank pus, which grew Streptococcus anginosus; cytology was negative. Renal biopsy was also negative for malignancy. A week into admission, the patient developed abdominal pain and was found to have a new large perinephric fluid collection on computed tomography. A drain placed in this area evacuated a significant amount of purulent fluid. Eight weeks later, after finishing a course of intravenous antibiotics antibiotics, the patient underwent a radical right nephrectomy. Pathology of the removed kidney showed xanthogranulomatous inflammation without malignancy, confirming a diagnosis of xanthogranulomatous pyelonephritis (XGP).

Discussion: XGP is a rare, destructive chronic inflammatory disorder of the kidney. [1] A kidney affected by XGP has an enlarged, multiloculated appearance on CT. Chronic infection and obstruction predispose to this condition. The most common pathogens associated with XGP are Proteus and E. coli; a review of the literature did not find any reported cases caused by S. anginosus, which was isolated in two fluid samples from this patient. However, S. anginosus is a virulent pathogen known for pyogenic infections and can be found in the normal intestinal flora. [2] Given this patient’s history of urinary tract cancer, the heterogenous renal mass seen on imaging was presumed to be a recurrence of his urothelial carcinoma. Although this patient had clear infectious signs and symptoms, anchoring on the past malignancy led providers to assume he had a superinfected neoplasm and caused a delay in draining the fluid collections seen on CT, which were thought to be necrotic tumor. It was not until the patient developed an acute large fluid collection, possibly from calyceal rupture due to high-pressure pus, that the medical team realized that he had multiple abscesses associated with chronic infection.This case also highlights the cognitive bias that can arise when an unusual imaging finding distracts from the clinical presentation. Prior to admission, this patient had presented to several emergency rooms with complaints of weight loss, night sweats, and cough. When CT showed a large renal mass, his infectious symptoms were not worked up further; instead, he was referred to a referred for oncologic treatment. As this case demonstrates, imaging results should be viewed as a supplement to the clinical presentation.

Conclusions: • Consider xanthogranulomatous pyelonephritis (XGP) in patients with destructive renal masses on imaging.• In patients with a history of malignancy, maintain a broad differential for new lesions or systemic symptoms. 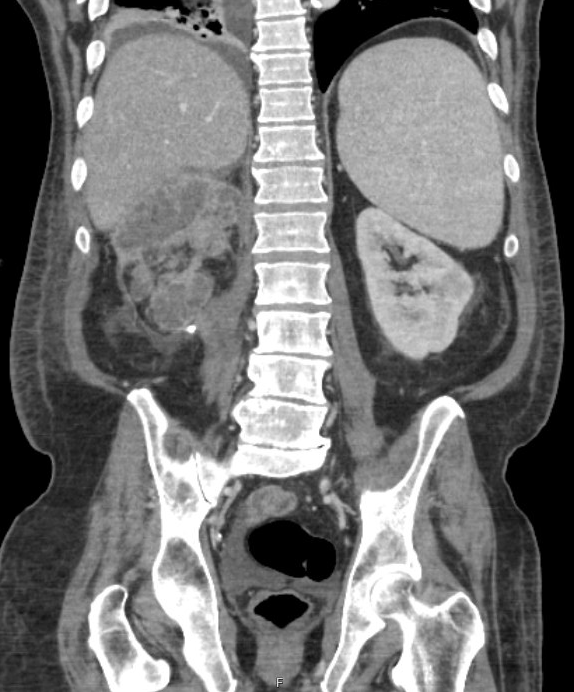 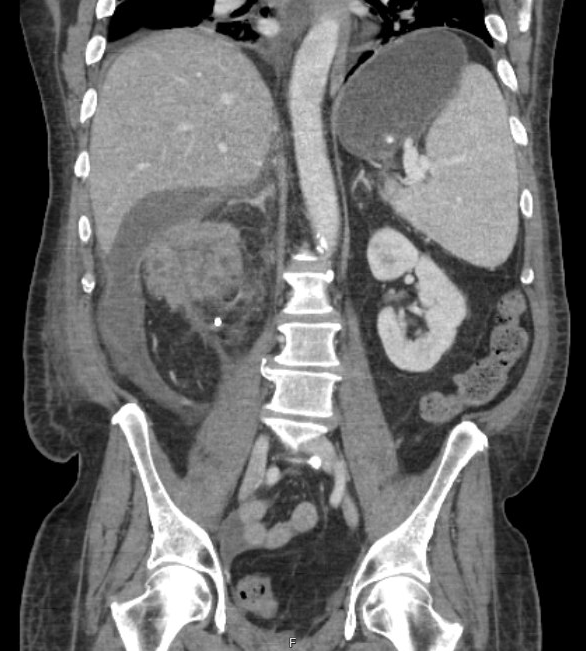 WHEN KIDNEYS EXPLODE: A CASE OF XANTHOGRANULOMATOUS PYELONEPHRITIS.